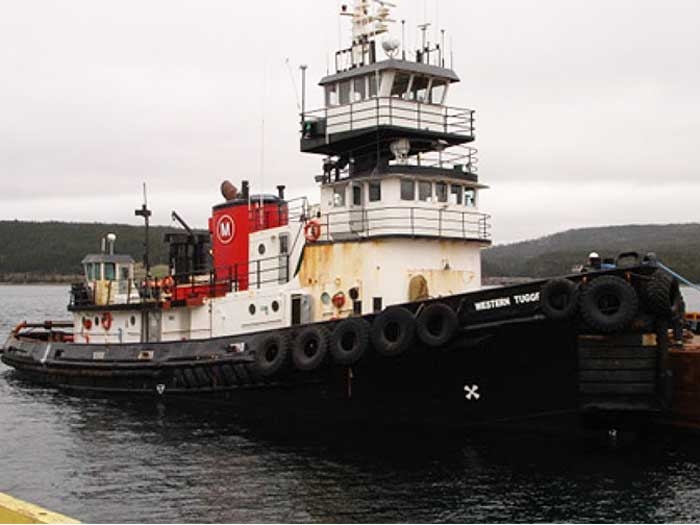 JULY 25, 2014 — On May 10, 2013, at approximately 0625 local time, the barge Arctic Lift I, carrying a cargo of steel rebar, capsized while under tow by the tug Western Tugger in moderate weather about 33 nautical miles southwest of Burgeo, Newfoundland and Labrador. The subsequent strain on the tow wire caused an auxiliary brake drum on the tow winch to shatter, and parts of it struck a crew member, who sustained fatal injuries.

Both the tugboat and barge were registered to Midnight Marine Limited, St. John’s, NL. The tug was built in Oyster Bay, NY, in 1943 and the barge in Houma, LA, in 1972. The owner purchased and salvaged the barge after a previous occurrence had left it a constructive total loss in 2006.

The Transportation Safety Board of Canada has now released its investigation report into incident.

The report identified minimal clearance above the water (freeboard), bad weather conditions, and a non-functional emergency tow release as factors in the accident.

On May 10, 2013, the Arctic Lift I developed a large list while being towed by the Western Tugger. The list may have been the result of several factors: water shipped on deck; down-flooding through hatches that were not adequately sealed; possible damage to the barge en route resulting in water ingress; or because unsecured cargo had shifted, affecting the barge’s stability. As a precaution, the master wanted to be able to release the barge in case it sank. Although the vessel had an emergency tow release, it was not functional due to this secondary brake. The master directed a deckhand to the winch room to loosen a secondary brake which had been added to the winch to assist the main brake. Moments later, the forward end of the barge rose out of the water and the barge capsized. The resulting strain on the secondary brake drum caused it to shatter, and parts of it hit and fatally injured the deckhand.

The investigation found a number of safety issues at play during the tow: an emergency tow release that was not capable of being operated immediately; hatches that were not reliably watertight; a minimal freeboard; and, cargo that was unsecured. The investigation also found that although a safety management system was under development, it had not been implemented prior to the occurrence.