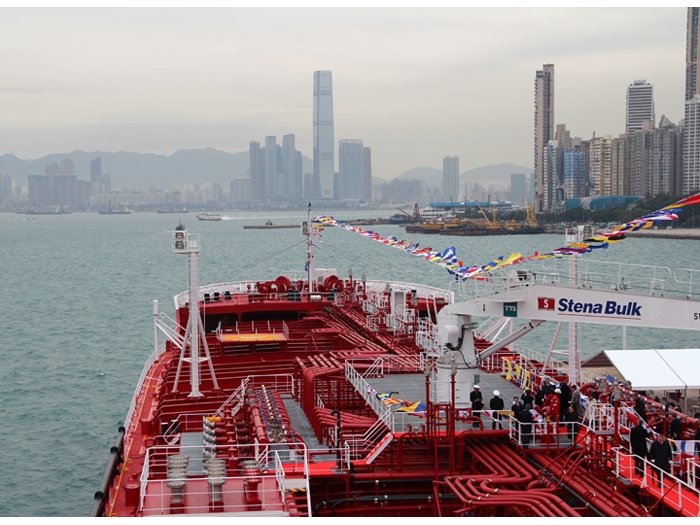 “Tank cleaning is where companies try to establish a competitive edge,” says Ajay Gour, INTERTANKO’s chemicals and vetting expert and Regional Manager for the Indian Sub-Continent, Middle East and Africa. “This is where they can claim to be better than the competition. But the majority of ship operators are all experienced, and the technology and methodology are pretty much the same across the board. Cleaning chemicals have seen some significant advances, but where we found the biggest change was not in cleaning, but in tank testing.”

Testing technology has improved immensely, Gour relates, but operators have not necessarily been the drivers behind improvements. “There are many different external influences, including scientific community, and testing today can measure levels of cleanliness far beyond the original requirements for the same cargoes.”

Ever more sensitive testing methods beg the question: Should tanks be as clean as possible? Or just sufficiently clean?

Lacking a working standard
INTERTANKO studied cases emanating from Houston, a major chemical tanker hub.
“We looked at over 250 different listings,” Ajay Gour recalls. “We found that there were various cleaning standards and varying results for the same cargo with the same end-use. There was evidence that resources were being wasted in over-cleaning, including manpower, energy, time, chemicals, and the resulting emissions were excessive.”

In response, INTERTANKO has proposed a simplified set of standards in order to bring the high-flying cleanliness requirements back down to sea level. “Product manufacturers realize that they have been pushing unduly stringent standards, and they understand that this is a cost driver. In a number of cases, small deviations will not push the cargo off-spec,” Gour maintains.

A working group of chemical tanker operators, owners, charterers, and manufacturers is in the early stages of reviewing existing standards, not for tank cleaning, but for tank cleanliness. “We are not telling anybody how to clean in order to achieve a certain standard,” Gour clarifies, “just advising on what standard they need to clean to.”

Nor do the proposed standards advise on how to test. “For example wall washing,” Gour relates. “It’s been around for a long time, but it has its weaknesses. It gives only a snapshot, not the status of the entire tank.” All the same, INTERTANKO is not singling out wall wash tests, or any other particular method.

“We are simply trying to refine cleanliness standards,” he says, “to make sure they are appropriate for today’s needs. High sensitivity testing is feeding anxiety in cargo owners and charterers, and our intention is to ensure quality while improving efficiency in the use of resources.”

Regarding the timeline for change, Ajay Gour’s advice to owners and operators: Watch this space. “The process is set in motion, and the first draft of new guidelines should be presented by the end of 2016,” he reports. “For this to happen, though, operators, shippers, and cargo buyers must all be on board. The drafting process will be used to quantify the overall benefits, but the end result should be that the goalposts are fixed for everybody.”

Taking the confusion out of tank cleaning
Understanding the required cleanliness standard for your vessels’ next cargo is one thing, but consistently achieving it can be a challenge. With decades of experience in the field, here are some words of wisdom from service leader Wilhelmsen Ships Service (WSS) on how not to go astray in the critical business of keeping tanks and cargoes up to spec.
Regardless of whether it is the result of poor preparation, lack of knowledge, time constraints or inadequate equipment, an unsatisfactory tank cleaning can become very costly, very quickly. Extra time in port, additional labour and chemicals, added surveyor charges, and in the worst cases demurrage claims, can turn what should be a routine exercise into a laborious and dreaded task.

To make matters worse for owners and operators, the issues affecting the tank cleaning process are amplified by the increasingly vigorous ad-hoc cleanliness standards currently being demanded by charterers and cargo owners. Often over-zealous and in many cases totally unnecessary, when it comes to the actual chemistry of contamination, there is unfortunately no officially-defined, universal set of cleanliness standards at present.
Instead, there are just two, very broad and de-facto criteria covering the various tank cleaning requirements currently demanded by charterers.

An inadequate pair
The first is the Water White Standard, which means the tank is visually clean, dry and odour-free. A suitable standard for CPP/vegetable oils, this standard does not involve a wall wash test.

The second, the High Purity Standard (HPE), is required for sensitive cargoes to be loaded such as products applied in food processing (Food Grade) or in pharmaceutical production (USP), where any contamination is unacceptable. All active solvents, such as chlorinated hydrocarbons, glycol ethers, light alcohols, for example, methanol, ketones such as acetone and many hydrocarbons like hexane also require the HPE.

In addition, many chemical companies require the HPE because the application of the product during processing is very sensitive to contamination.

Though there are guidelines on the procedures and typical level of cleanliness required by the High Purity Standard for each and every product available, many companies have additional, off-spec requirements. Creating unwanted confusion for cleaning crews and posing considerable problems when it comes to demurrage claims, these ad-hoc requirements are why bodies such as Intertanko are eager to establish a new, detailed set of cleaning standards. An ongoing initiative aimed at creating an industry wide set of rules, its acceptance is by no means guaranteed. So, for now we’re stuck with the existing pair of standards and the numerous company-by-company and cargo-by-cargo variations demanded by charterers.

In spite of this, with detailed planning, preparation and access to some basic information on the cargo’s properties and the conditions inside and outside the tanks, tank cleaning should actually become a matter of routine. Systematic, efficient and completed quickly to the required standard, whatever that may be. No rejections, hold-ups, incidents or accidents.

Chemistry 101
Knowing the properties of the products you’re discharging and loading, along with understanding how they interact with each other and with the surface of your tanks is obviously key. However, learning this from scratch can seem a daunting prospect, hence the ongoing success of Supercargo specialists. But in practice, the vast majority of commercially traded cargoes and their associated tank cleaning processes can comfortably be managed in-house with access to a specific cargo-handling database, such as Miracle or Milbros, and just a little basic knowledge on the major product groups, as outlined below.

High melting point
Such products should be washed at a temperature of 15-20C above melting point. During washing there should be no ballast water or cold cargoes adjacent to the tank to be cleaned. Special attention must also be given to liquid and vapor line systems to avoid freezing/solidification at cold line segments. Beginning the tank cleaning process as soon as possible after discharge is strongly recommended.

High vapor pressure/boiling point
Products with a high vapor pressure (higher than some 50 mbar at 20 C) can actually be removed from the tank by evaporation. As always, during ventilation, special care must be taken to prevent the risk of explosion (flammable products) and emissions (toxic vapors).

Polymerization
The initial wash of products that tend to polymerize should be carried out with cold (ambient) water. Washing with hot water results in polimeric residues being left in tanks and lines, meaning an incredibly difficult clean-up job.

Evaporation of volatile substances
Cargoes consisting of mixtures with different vapor pressures should neither be cleaned by evaporation, nor prewashed hot. The evaporation of the light substances from a mixture could result in non-volatile residues, which are very difficult to remove.

Isocynates
Must never come into contact with water, not even the residues, because the reaction product and insoluble urethane (plus CO2) are very difficult to remove. Such products must be washed with a suitable solvent that does not contain any water.

Reaction with oxygen
Drying and semi-drying vegetable and animal oils react with oxygen to form a varnish-like polymeric film. This is very difficult to remove from bulkheads. Since heat increases the speed of the reaction the initial washing of these products must be done with water at ambient temperature, and as quickly as possible.

Reaction with hard water
Formed by the calcium and magnesium present, seawater, for example, has a very high water hardness. This poses no problem for most products, but fatty acids and vegetable oils with a high free fatty acid content will form white sticky residues if they are cleaned with a water of a high water hardness.

Smell
Minor residues of a smell-producing cargo left in lines, valves and pumps (including pump cofferdams) can contaminate a sensitive cargo. To neutralise the smell of some chemicals (e.g. Acrylate, Nitrobenzene or Pygas) the use of a smell killer may be recommended.

Understanding the conditions. Inside and out
Along with product knowledge, an understanding of just how the conditions in and outside tanks can affect a cleaning job is vital for consistently successful cleaning:

The Tank Surface
Having managed the surrounding conditions, focus should turn to the surface of the tanks. Their composition and condition can have significant implications for the cleaning process.

Stainless steel
Corrosion can occur if there is surface contamination. Both pickling and passivation are chemical treatments applied to the surface of stainless steel to remove contaminants and assist the formation of a continuous, passive chromium oxide film. Pickling and passivation are both acid treatments and neither will remove grease or oil. If the steel is dirty, it may be necessary to use a detergent or alkaline cleaning before pickling or passivation.

Zinc silicate coating
An anti-corrosive paint system made from zinc dust, with certain additives and a binder. The high levels of zinc dust produce a zinc-zinc metal contact resulting in cathodic protection, similar to that obtained from galvanizing. However, zinc coatings are inherently porous, presenting a variety of cleaning problems. It is believed that the cargo migrates into the pores and capillaries, similar to fluid adsorption processes. Zinc coatings have a good resistance against solvents, but are not resistant to strong acids and bases.

Epoxy coatings
Pure epoxy, phenolic epoxy and isocyanate epoxy form cross linkages resulting in relatively good resistance to a greater range of cargoes. Epoxy systems are usually resistant to some weak acids and strong alkalis and do not absorb oil-like substances. Epoxy coatings are, however, prone to absorbing some solvent-like cargoes. This absorption is caused by swelling and subsequent softening of the coating. After transporting aggressive cargoes, the coated tank has to be ventilated until the cargo has been desorbed (released) from the coating film, which results in hardening and decreased swelling. This can take up to several days, depending on the type of cargo, type of coating and film thickness. Water may not be used for cleaning until this ventilation process is finalized. Otherwise the water can lead to blistering and subsequent serious damage of the coating. The more solvency power a cargo has, the more cargo residues could still be present in the coating. This could lead to either contamination of the next or subsequent cargoes, or breakdown of the coating film.