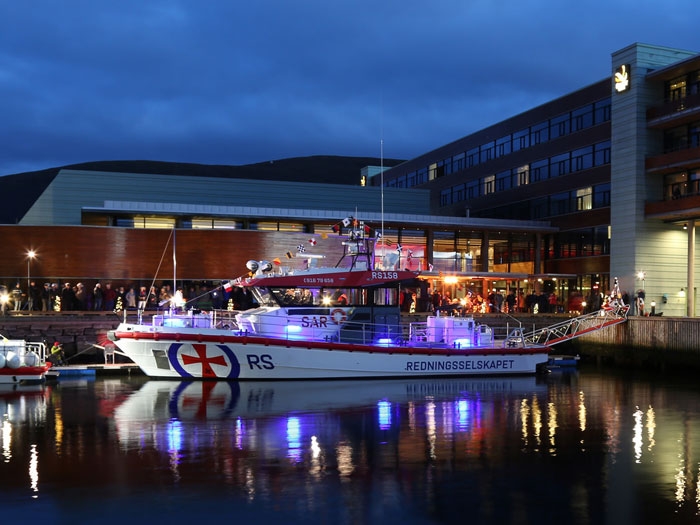 It is the first vessel in the society’s new Ulstein class and is named for long time Ulstein Group CEO Idar Ulstein.

The Ulstein Group has financed the major part of the total NOK 38 million costs.

The boat will be stationed in Fosnavåg, and succeed the RS Emmy Dyvi, which is currently based there.

“This is a gift in memory of Idar Ulstein, Ulstein Group’s CEO and Chair of the Board through many years, who passed away in 2012. Idar Ulstein was a great supporter of RS. This donation, honoring his life and contribution to the maritime industry, will potentially help save the lives of many people experiencing difficulties off the Norwegian coast,” said Tore Ulstein, Chair of the Board in Ulstein Group.

The 22 m rescue vessel has a top speed close to 40 knots. By using powerful twin engines and a water jet, she combines high speed with large bollard pull.

RS Idar Ulstein is outfitted with the latest in modern equipment for tackling demanding rescue operations in difficult weather conditions.

“Short response time is essential to saving lives at sea. With RS ‘Idar Ulstein’ we combine a high-speed vessel with the size needed to operate in the demanding coastal regions,” says Nicolai Jarlsby, President of the Norwegian Society for Sea Rescue (RS)

The Search and Rescue (SAR) vessel is operated by a crew of three; captain, mate and chief. She will primarily serve coastal, fishing and recreational vessels. As well as emergency lifesaving and rescue, the vessel is designed to perform operations including towing, salvage, diving missions, fire, ambulance and medical transportation. The vessel is equipped with the latest in radar technology and an advanced thermal camera. This makes RS Idar Ulstein a complete rescue vessel.

RS Idar Ulstein was built at the Swede Ship Marine shipyard in Sweden. The RS has an option of building three new SAR vessels in the Ulstein class.

Modernizing the RS fleet is essential. “We still have older vessels stationed along the Norwegian coast. We aim to find donators who can help us financing more vessels in the Ulstein class,” says Mr. Jarlsby.