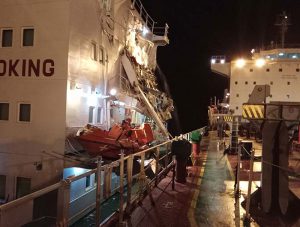 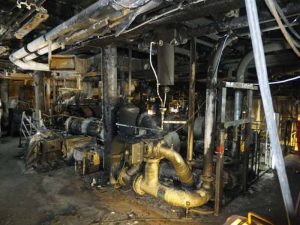 As the 1991-built RO/RO ferry, the Pride of Canterbury, was approaching Calais, says MAIB, it became apparent that the starboard controllable pitch propeller was not responding, so the starboard shaft was declutched and the two starboard main engines were stopped.

Prevailing weather conditions were such that the master was content to proceed using one shaft and one bow thruster. As the ship approached its berth, a pipework joint in the starboard controllable pitch propeller system ruptured, spraying oil on to the exhaust uptakes, starting a fire.

The main engine room was evacuated, the general emergency alarm was sounded and the passengers were mustered at emergency stations. The ferry berthed safely, the fire was extinguished using the ship’s Hi-fog system and a fire hose, and the passengers and cargo were disembarked normally.

The investigation determined that the back pressure valve in the starboard controllable pitch propeller hydraulic system had jammed shut, resulting in the return line oil pressure rising to the point where a flanged pipework joint failed. The failed joint, along with others in the system, was not shielded to prevent a spray of oil in the event of joint failure. The back pressure valve was found to be worn and had not been tested for functionality during its 23 years of service.

Safety issues emerging from the incident were:

P&O Ferries has completed a program of modifications to Pride of Canterbury and its three sister ships as they attend refit.

The CPP system was designed and manufactured by LIPS, which became part of Wartsila in 2002. Wartsila has issued a technical bulletin specifying back pressure valves should be replaced after 15 years and the vessel’s classification society, Lloyd’s Register, has been recommended to propose to the International Association of Classification Societies a unified requirement for high pressure alarms to be fitted in controllable pitch propeller systems.