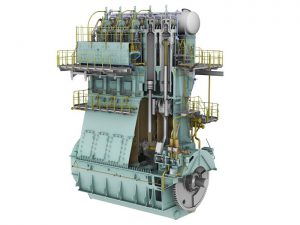 The vessel will be engaged in a 20-year free-on-board (FOB) off-take of approximately 800,000 tons per year of LNG, sourced from U.S.Gulf liquefaction projects, including the planned terminal near Freeport, Texas.

The official contract for the vessel between MOL and DSME was signed in February 2015 and the decision to adopt WinGD X-DF engines was taken in August. The first engine is due for delivery to the shipyard in June 2017.About WinGD low-pressure DF

The low-pressure gas admission system used by WinGD on its X-DF engines draws on Wärtsilä’s long experience with what has become a well-proven industry standard technology on medium-speed dual-fuel engines. In contrast to high-pressure gas injection engines that operate on the Diesel cycle, WinGD’s low-pressure DF system works on the lean burn Otto cycle – i.e. ignition of a compressed lean air-gas mixture by injection of a small amount of liquid fuel.

With low-pressure gas admission the gas fueling system on X-DF engines does not require a high-pressure electrically-driven compressor, reducing equipment costs, onboard energy consumption and maintenance.

“With the imminent implementation of the IMO Tier III regulations in Emission Control Areas for new vessels, we are registering an increasing interest in our X-DF series from markets worldwide, especially for the propulsion of LNG carriers,” says Rolf Stiefel, Vice President Sales and Marketing at WinGD.