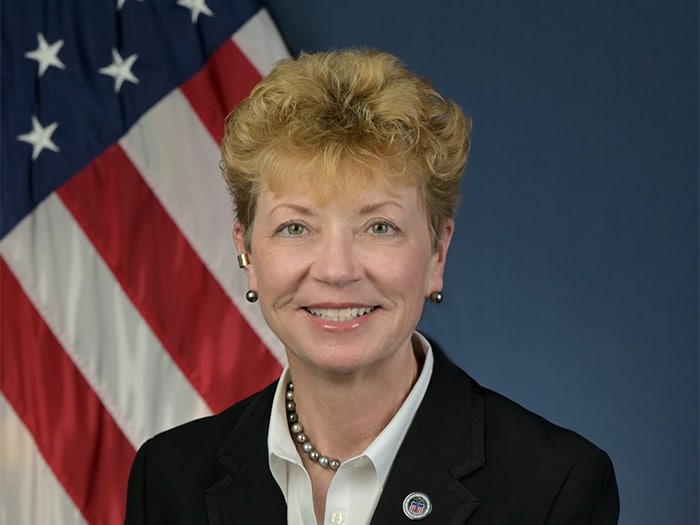 Following her confirmation by the Senate, Rear Admiral Ann Phillips, USN, Ret., has now been sworn in as the 20th Administrator of the Maritime Administration (MARAD). She is the first woman to hold the post.

“From her distinguished naval service to her leadership on coastal infrastructure, Rear Admiral Ann Phillips has championed America’s maritime sector throughout her career,” said Transportation Secretary Pete Buttigieg. “Her experience and expertise will be invaluable as we address supply chain bottlenecks, implement the maritime investments in the Bipartisan Infrastructure Law, ensure the safety and success of midshipmen at the Merchant Marine Academy, and combat climate change in the maritime sector. I thank Deputy Administrator Lucinda Lessley for her tremendous service guiding MARAD as Acting Administrator and look forward to all that she and Ann will accomplish together at the agency in the years ahead.”

As head of the Maritime Administration, Phillips will advise the Secretary of Transportation on commercial maritime matters, to include the movement of goods, supply chain, as well as the U.S. maritime industry, environment and compliance, ports and waterways infrastructure, and strategic sealift. She will engage public and private stakeholders in the maritime industry and oversee the U.S Merchant Marine Academy.

Phillips will also oversee MARAD’s programs to improve and modernize the U.S. maritime network by administering the investment in ports and waterways made possible by the Bipartisan Infrastructure Law, including $2.25 billion to be awarded over the next five years through the Port Infrastructure Development Program and $25 million for the America’s Marine Highway Program.

“It’s an honor to work alongside the professionals who make up the MARAD team, and, to serve the American people, Secretary Buttigieg and the Biden-Harris Administration,” said Phillips. “I understand the critical role that our commercial Merchant Marine plays in our national and economic security. In my nearly 31-year Navy career, I have witnessed many of the challenges facing our maritime sector and look forward to working with my colleagues to address them. This is an exciting time for MARAD as we work to expand and strengthen America’s waterborne transportation system and workforce.”

Phillips served most recently as Special Assistant to the Governor for Coastal Adaptation and Protection, Commonwealth of Virginia, developing Virginia’s first Coastal Resilience Master Plan. Prior to her appointment to the Office of the Governor, she served nearly 31 years on active duty and has extensive experience operating with multi-national maritime forces, including NATO and Partnership for Peace nations, and serving overseas in Guam and Lisbon, Portugal.

Her final flag command, Expeditionary Strike Group TWO, included 14 ships and 10 subordinate commands – all the Amphibious Expeditionary Forces on the East Coast of the United States. Earlier she served on the Chief of Naval Operations’ Staff as Deputy Director and then Director of Surface Warfare Division. Previous to those positions, she had the honor to commission and command the USS MUSTIN (DDG 89), and to command Destroyer Squadron 28.

Phillips graduated from the University of North Carolina at Chapel Hill and earned a Master of Business Administration, with distinction, from The College of William & Mary – Raymond A. Mason School of Business.