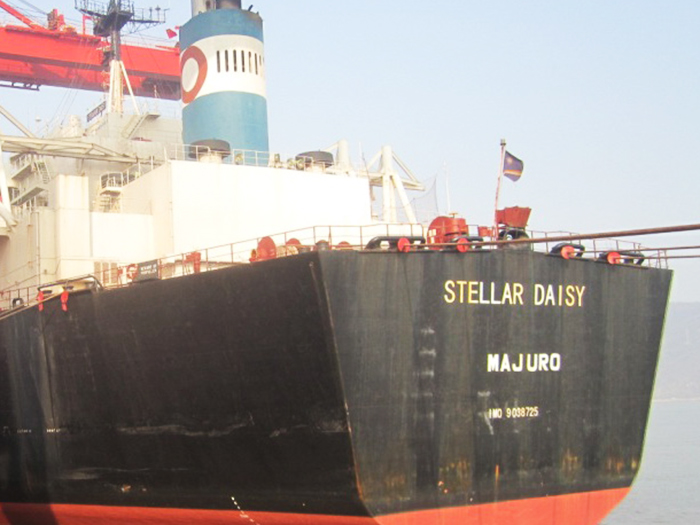 Owned by South Korea’s Polaris Shipping, Stellar Daisy was delivered in 1993 as very large crude carrier (VLCC) and converted to a VLOC in January 2009.The ship was classed with the Korean Register of Shipping (KR), which has issued a response to some of the findings in the Marshall Islands’ report

The Marshall Islands investigation determined that the likely direct cause of the ship’s foundering was a rapid list to port following a catastrophic structural failure of the ship’s hull that resulted in a loss of buoyancy and uncontrolled flooding.

The structural failure and flooding are thought to have begun in the No. 2 port water ballast tank (WBT) and then progressed rapidly to include structural failure and flooding in multiple WBTs, voids, and cargo holds. The structural damage was likely due to a combination of factors, including the strength of the ship’s structure being compromised over over time due to material fatigue, corrosion, unidentified structural defects, multi-port loading, and the forces imposed on the hull as a result of weather conditions.

Among the likely causal factors cited in the report: “ineffective assessments of structural damage identified when the ship was in dry dock in 2011, 2012, and 2015 which failed to determine the cause of the structural damage, identify any potential defects with the conversion design, or require the development of appropriate repair plans.”

The Korean Register (KR) says that, in general, it agrees with the majority of the content contained within the report and concurs that the most likely explanation for the loss of the vessel was due to a catastrophic structural failure of the ship’s hull which probably began in No 2 Port Water Ballast Tank (WBT).

The Korean Register says that, in its opinion there are, however, areas of the report that are directed specifically at KR which require further explanation. KR’s areas of concern are focused on page 71 of the report (Part 3: Analysis):

The report states: that KR’s review and approval of the conversion design was based on the assumption that all of the scantlings, including those from when the ship was constructed as a VLCC in 1993, were as original and did not take into account material fatigue. The basis for this assumption was that the Finite Element Analysis (FEA), which was conducted in accordance with the requirements of the KR Rules for Steel Ships, took into consideration allowable stress, corrosion, and stresses due to local notch effect.

KR responds: the report correctly states that the FEA and fatigue strength assessment took into consideration allowable stress, corrosion, and stresses due to local notch effect. This is common practice for many IACS classification societies. An independent review conducted by BSR (Bruce S. Rosenblatt & Associates) – the third-party hired by RMI to technically review the conversion process – confirmed that KR’s structural analysis was conducted properly.

The report states: that although KR did conduct a failure analysis of the damage to the transverse bulkhead at frame No. 65, it did not conduct a failure analysis after an extensive number of cracks were identified and repaired when the ship was in drydock in 2011, within two years after the conversion was completed. As a result, potential weaknesses with design details were not identified. This is an indication that KR’s monitoring and assessment of the ship’s structural integrity was not as effective as it might have been.

KR responds: a failure analysis is carried out at the discretion of the attending surveyor when, in their assessment, a defect or damage is “out of the ordinary” and further scrutiny is required. This is in accordance with KR procedures and in common with other IACS classification societies. The RMI report correctly states that a failure analysis of the damage to the transverse bulkhead at frame No. 65 was conducted as it was determined by the attending surveyor to be “out of the ordinary” and similar damage was not found in other parts of the ship. However, the cracks/defects identified and repaired at the time of drydocking in 2011 were determined to be those typically found on board ships of a similar age (note that Stellar Daisy was 18 years old in 2011). Based on this observation, the attending surveyor determined that the cracks/defects were not “out of the ordinary” and as long as proper repairs were performed, a failure analysis was not needed.

KR responds: As stated in the casualty investigation report, a failure analysis was carried out to assess the structural integrity of damage to the transverse bulkhead at frame No. 65, the result of which showed that there was no area of concern and proper repairs were undertaken to renew the damaged part to its original condition. KR also examined the surrounding bulkheads of Stellar Daisy as well as bulkheads on 29 other converted VLOCs (approximately 230 bulkheads in total) to determine if there were any similar defects. The result of this extensive investigation was that there were no areas of concern. As a thorough inspection and comprehensive repairs were undertaken, KR determined that there was no “dangerous” structural issue that warranted reporting to the flag Administration.

However, mindful of the recommendations in the report, KR plans to review its reporting procedures to avoid any future misunderstandings.