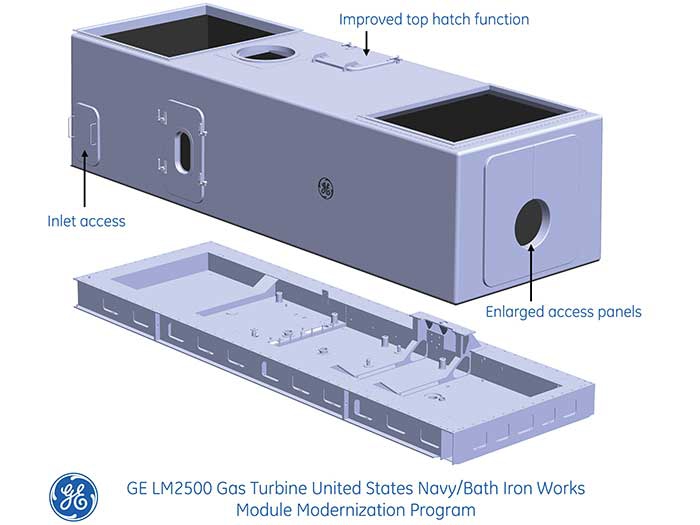 The MMP will inject updated technology into the gas turbine module system and reduce enclosure weight by approximately 50%.

GE VP and General Manager, Evandale, Brien Bolsinger says that the MMP will improve the manufacturing and maintainability of the LM2500 marine module, “all the while reducing module weight, noise, radiated heat – and most importantly – life cycle costs.”

He adds that the new marine module will meet global naval requirements, including Mil 901D shock and that, once available in 2018, the lightweight design can easily be applied to LM2500 family gas turbines used by other international navies.

The U.S. Navy is GE’s largest marine gas turbine customer with over 350 LM2500 engines in operation across multiple programs. Products developed under the MMP will be introduced to the U.S. Navy’s DDG-51 program starting with Flight III.

The MMP focuses on use of composites including for the enclosure, inlet barrier wall and inlet screen. It also targets gas turbine and package sensors to improve condition monitoring and manufacturability.

All bolted joints between the walls and roof panels will be eliminated in the composites enclosure to improve noise attenuation and simplify assembly and the enclosure will feature improved entry points via the addition of an access panel to the inlet plenum, enlarged rear access panels and improved top access hatch design.

These enhancements will significantly reduce the weight of the door and the hatch and will improve ingress/egress, especially in the nose-down orientation on board ship.

Other composites benefits include:

Detailed design for MMP products is ongoing, with extensive fire testing on subcomponents planned for 2016. The prototype enclosure is expected to be complete in April 2017, and full scale fire, shock, noise and vibration testing is planned to be completed mid-2018. The new composite enclosure will be available by the fourth quarter 2018.