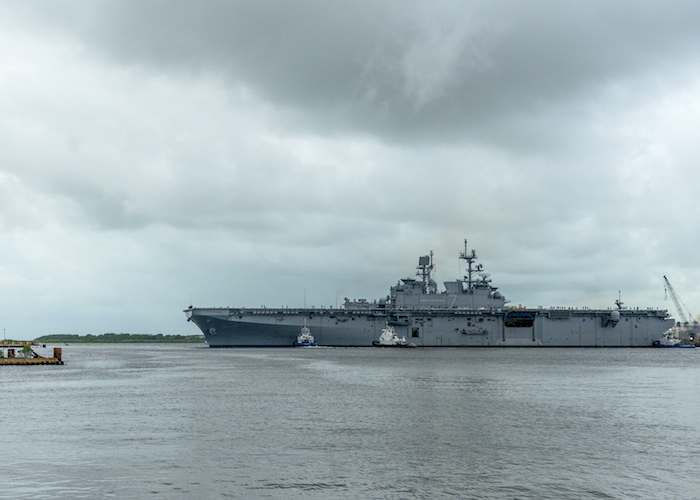 Both the House and Senate have now passed their versions of the National Defense Authorization Act. As this was written, the two measures were headed for reconciliation, but so far as Navy shipbuilding is concerned, there are no vastly major differences in the two versions.

One thing that is clear is that whatever emerges in the final bill will likely be some sort of placeholder that keeps things rolling, while requirements for potentially dramatic changes in force structure evolve.

The House bill provides $22.3 billion to procure nine Navy ships, $2.4 billion above the administration request. Funds are provided for two DDG-51 guided missile destroyers, the initial Columbia Class submarine, two SSN-774 Virginia class attack submarines, one Frigate, one LPD-17 Flight II, and two towing, salvage, and rescue ships. The Senate version of things provides $21.3 billion for shipbuilding, $1.4 billion above the request. One major difference between the two is that while the House version fully funds two attack submarines, keeping up the two boats a year pace at which the program has been proceeding, the Senate only funds advance procurement of materials for the second.

Interestingly, in its report accompanying the bill, the Senate Appropriations Committee says: “The committee recognizes that this additional submarine was the Chief of Naval Operations’ top unfunded priority for fiscal year 2021. If this level of support continues, the committee expects the Navy to budget accordingly in its fiscal year 2022 future years defense program submission.”

For many years now, Pentagon top brass have produced unfunded priorities lists that essentially telegraph the items that they think they really, really need but that the Office of Management of Budget won’t let them put in the budget. The hope is that this will prompt Congress to add the money in. Is this a sign that some in the Senate no longer want to play along?

“The committee recommends a provision that would require that certain technical conditions be met prior to Milestone B approval for medium and large unmanned surface vessels.

“The committee notes that the budget request provides for the prototyping and testing of Medium and Large Unmanned Surface Vessels (MUSVs and LUSVs), including procurement of up to two additional LUSVs in conjunction with a Strategic Capabilities Office (SCO) initiative. The committee understands that the four LUSVs procured by the SCO beginning in fiscal year 2018, at a cost of more than $510 million, are sufficient to achieve the objectives of the SCO initiative, which is to be completed in the fourth quarter of fiscal year 2021.

“The committee further notes that the budget request includes plans to award the LUSV Detail Design and Construction (DD&C) contract in fiscal year 2022 and transition LUSV to a program of record in fiscal year 2023.

“The committee remains concerned that the budget request’s concurrent approach to LUSV design, technology development, and integration as well as a limited understanding of the LUSV concept of employment, requirements, and reliability for envisioned missions pose excessive acquisition risk for additional LUSV procurement in fiscal year 2021. The committee is also concerned by the unclear policy implications of LUSVs, including ill-defined international unmanned surface vessel standards and the legal status of armed or potentially armed LUSVs.

Additionally, the committee notes that the Navy’s most recent shipbuilding plan, “Report to Congress on the Annual Long-Range Plan for Construction of Naval Vessels for Fiscal Year 2020,” acknowledges similar issues: “Unmanned and optionally-manned systems are not accounted for in the overall battle force. … The physical challenges of extended operations at sea across the spectrum of competition and conflict, the concepts of operations for these platforms, and the policy challenges associated with employing deadly force from autonomous vehicles must be well understood prior to replacing accountable battle force ships.”

The committee believes that further procurement of MUSVs and LUSVs should occur only after the lessons learned from the current SCO initiative have been incorporated into the system specification and additional risk reduction actions are taken.

“A specific area of technical concern for the committee is the Navy requirement for MUSVs and LUSVs to operate continuously at sea for at least 30 days without preventative maintenance, corrective maintenance, or emergent repairs. The committee is unaware of any unmanned vessel of the size or complexity envisioned for MUSV or LUSV that has demonstrated at least 30 days of such operation.

“The committee understands that the SCO prototype vessels that are intended to provide risk reduction for this program have demonstrated between two to three days of continuous operation. The committee also understands that the SCO vessels are approximately 25% the size by tonnage of a LUSV, which may limit the applicability of lessons learned and risk reduction from the SCO vessels to the MUSV and LUSV programs.

“Accordingly, this provision would require at least two main engines and electrical generators, including ancillary equipment, to be formally qualified by the Navy, including a successful demonstration of at least 30 days of continuous operation prior to the LUSV or MUSV Milestone B approval and would require the use of such engines and generators in future USVs. The provision would also require the Senior Technical Authority and Milestone Decision Authority to take additional actions related to reducing the technical risk of these programs prior to a Milestone B approval.

“The committee views the qualification of these critical subsystems as an essential prototyping step necessary to provide a solid technical foundation for the MUSV and LUSV programs.

“Rather than delaying these programs, the committee believes that qualified engines and generators will enable the delivery of capable, reliable, and sustainable USVs that meet the needs of fleet commanders faster than the plan contained in the budget request.”