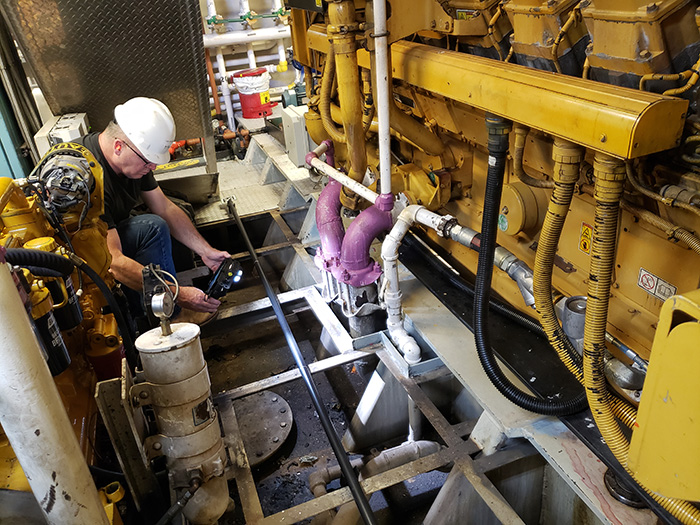 Capture of the starboard engine, port side detail

The 95-foot high tower barge tug servicing the East Coast of the United States was built in 2009 and is powered by two Caterpillar 3516 diesel engines each driving four-bladed Kaplan style propellers.

Following a noise and vibration study conducted by Advanced Mechanical Enterprises Inc. (AME) earlier this year, Ship Architects Inc. (SA), Mobile, Ala., was commissioned to design modifications to the steel girders on which the engines are mounted to allow installation of six isolation mounts for each of the engines.

DotProduct’s Chief Marketing Officer Tom Greaves and Marketing Manager Chris Ahern boarded the Mount St. Elias in New Haven, Conn., shortly after the vessel arrived in port. Their objective was to complete the scanning of the engine girders before the vessel was scheduled to get underway. Scanning operations took approximately two hours, however, some of this time was required to remove the diamond plate decking beside the engines, some of which had to be cut to allow removal.

The scans were crudely aligned to ship coordinates in the field using the top of the fuel tank for a Z- reference plane and the bulkheads used for fore-and-aft alignment of the scan data. After the data was aligned, it was transmitted to SA via a mobile hotspot. The small file sizes of the DotProduct data enabled rapid transmission right from the engine room to Dropbox for retrieval by SA’s Director of Engineering Josh Trippi. According to Trippi, one of the key values of using handheld scanning is that “you get to see the results before the survey crew leaves the vessel—important when access is difficult or constrained.”

In its findings, DotProduct found that the congested geometry of tug engine rooms, the need for rapid data collection imposed by short in-port access times, vibration caused by operating engines and of course budget constraints all speak to the strength of handheld scanning workflows for these applications. Alternative methods, for example manual measurements supplemented with photographs, risk missing critical measurements and can be time consuming. Moreover, it is not practical to share the results from the field to the office until after the documentation crew has left the vessel and the vessel has left port. Tripod-scanning workflows are also burdened with multiple set-ups, associated registration of point clouds, higher equipment cost and the challenges of working on a vibrating platform.