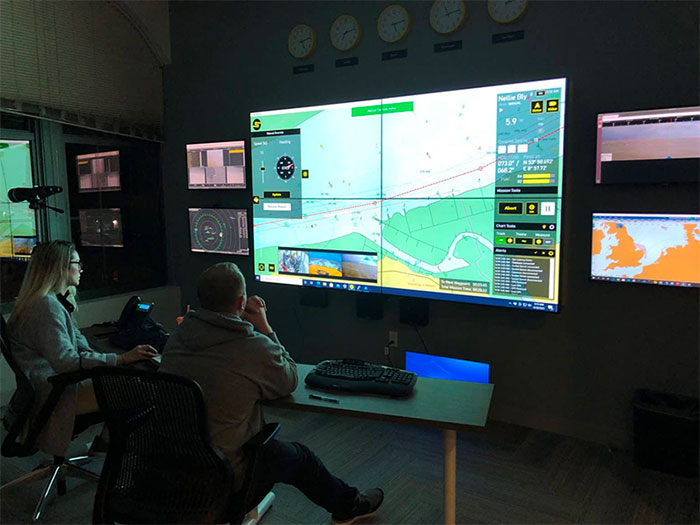 In a first between a maritime union and an autonomous technology company, American Maritime Officers (AMO) has entered into a labor agreement with Sea Machines Robotics, the leading developer of autonomous command and control systems.

In the collaboration, AMO-represented U.S. Coast Guard-licensed officers are supporting Sea Machines’ first-of-its-kind 1,000 nautical mile autonomous voyage around Denmark. AMO officers will command the tugboat Nellie Bly on her autonomous voyage remotely from Sea Machines’ Boston-based control center. The officers received training prior to the voyage kick-off and have support from the Sea Machines’ engineering teams in Boston and Hamburg throughout the estimated three-week program. Additionally, the Nellie Bly will always carry two on-board safety captains, with occasional guest passengers, and will call on ports along the route to display and demonstrate the technology.

“AMO is working to anticipate and prepare for the future of the maritime industry, understanding the implementation of the technology will happen in the not-so-distant future. Failure to prepare for the future means failure to participate in it. Through this agreement, AMO is working to set careers for future generations of merchant mariners,” said AMO National Executive Vice President Captain William Barrere. “AMO is committed to ensuring the human element – particularly the expertise of U.S. merchant mariners earned through extensive experience and comprehensive training at industry-leading facilities, such as STAR Center – remains a key component of maritime transportation to ensure safe navigation, sustained mariner employment and the reliable operation of onboard equipment and systems.”

“Sea Machines is built by a team of mariners – currently employing personnel from five of the seven U.S. maritime academies – and operates with a mission to uplift and expand marine industries with technology,” said Sea Machines’ CEO Michael Johnson. “We envision a future in which autonomous technology can expand the world’s fleets and waterborne transportation systems, make transport over water more versatile and competitive with other modes of transportation, and expand the maritime workforce through growth in the industry, ultimately creating jobs. We’re pleased to be working with AMO on this pioneering voyage toward the expansion of our industry.”

Sea Machines is streaming the journey live on a dedicated website