Aker Philadelphia Shipyard, Inc. (APSI), the sole operating subsidiary of Aker Philadelphia Shipyard ASA (Oslo: AKPS), began production activities today on the first of two Aframax tankers that it will build for SeaRiver Maritime, Inc., Exxon Mobil Corporation’s U.S. marine affiliate. When completed in 2014, the vessels will be 820 feet long and will be capable of carrying 115,000 tons of crude oil. They are being built in partnership with Korea’s Samsung Heavy Industries and will replace two existing double-hull tankers. The new vessels will be used to carry Alaskan crude from Prince William Sound, Alaska, to U.S. West Coast destinations.

Since the shipbuilding contract was signed in September 2011, engineering, planning, and procurement work have been underway. After a small ceremony in the shipyard’s Fabrication Shop, the cutting of the steel plates began. These plates will become part of the double hull of the tanker that protects the cargo tanks.

Kristian Rokke, President and CEO of Aker Philadelphia, said, “We are excited to undertake this project which is an important demonstration of the power of American manufacturing. Today we used the shipyard’s brand new plasma cutting machine, which was manufactured in Wisconsin, to cut steel plate that was rolled right here in Pennsylvania. Thousands of welding and fabrication hours will be spent in Philadelphia making this plate, and many more like it, into a quality vessel to move Alaskan oil.”

SeaRiver President Jack Buono commented, “This project, which is known as the Liberty Class, represents our ongoing commitment to safe and reliable marine transportation. The robust design incorporates important technologies to meet some of the most demanding marine conditions in the world.” 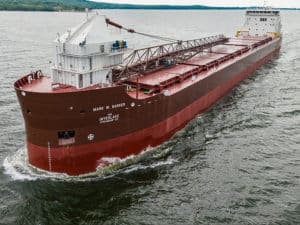