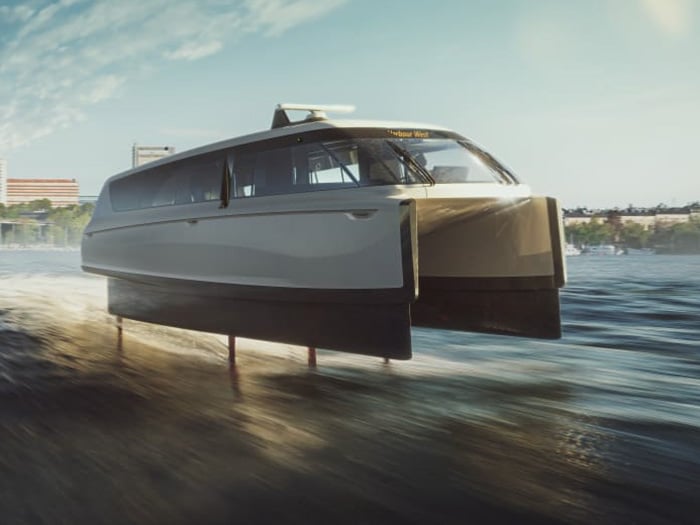 Two students at Sweden’s Royal Institute of Technology (KTH) have completed a master’s thesis comparing the carbon footprint of electric hydrofoil ferries to that of traditional diesel ferries. The study shows that the hydrofoil ferries emit 97.5% less carbon dioxide during their life cycle than diesel-powered ones.

Felix Glaunsinger and Dennis Olsson, who both graduated from KTH this summer, used the Life Cycle Assessment (LCA) method to compare and analyze CO2 emissions from electric hydrofoil and diesel boats.

“Life Cycle Assessment is about examining the environmental impacts relating to all the life cycle stages of a product, from extraction of raw materials, production, and use of the product until the end of its life cycle,” says Olsson.

Olsson and Glaunsinger conducted their thesis project at electric boat manufacturer Candela, whose new, automated factory in Rotebro, outside Stockholm, is building the first Candela P-12 Shuttle, a 50-passenger foiling e-ferry that the Region of Stockholm is set to operate for a nine-month trial period next year. If it meets the high expectations placed on it, the hope is that the city’s fleet of over 70 diesel vessels eventually will be replaced by P-12 Shuttles – and that land transport from congested highways can shift to the waterways.

The results from Olson and Glausinger’s project are promising in terms of CO2 emissions. Their study shows that over a service life of 30 years, the carbon footprint from the foiling electric ferrie is 97.5% lower than that of the diesel vessels used in the comparison.

“The combination of using hydrofoils and having electric power as the energy source is the primary factor behind the low emissions. And since Sweden’s power grid is almost completely free of carbon dioxide emissions, this is a clear benefit with using this kind of boat,” says Glaunsinger.

The KTH study also shows that the Candela P-12 Shuttle has a low carbon footprint from production compared to the diesel ferries examined – an interesting finding, since other electric vehicles, such as cars, often have a heavier carbon footprint from production than fossil fuel-driven equivalents due to the negative impact of manufacturing the batteries.

“Just like aircraft, our vessels are made to be as light as possible to maximize the number of passengers and performance. A welcome side effect is that we’re able to use smaller batteries and less raw material, which in turn means a lower negative climate impact,” says Erik Eklund, head of Candela’s commercial vessels.