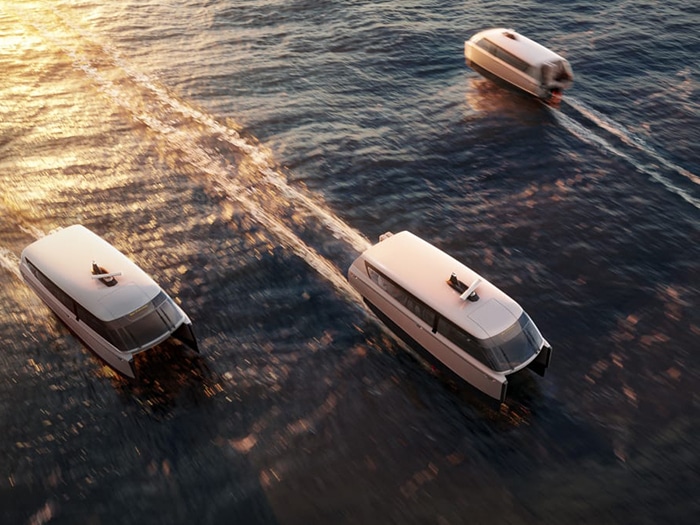 Stockholm, Sweden, based Candela Technology AB believes that its latest all-electric passenger hydrofoil, the Candela P-12 Shuttle, could be the ideal fit for Seattle ferry services. Before that, the ferry will get a tryout from its hometown crowd. Candela will be laying the carbon fiber keel for the very first Candela P-12 Shuttle at the company’s new, automated factory in Rotebro, outside Stockholm, towards the end of this year and the Region of Stockholm is set to operate the vessel for a nine-month trial period next year. If it meets the high expectations placed on it, the hope is that the city’s fleet of over 70 diesel vessels eventually will be replaced by P-12 Shuttles – and that land transport from congested highways can shift to the waterways.

In terms of passenger capacity, the P12 Shuttle is smaller than other contenders in the foiling e-ferry race, carrying just 30 rather than the 150 or so cited for other recently announced designs. This is seen as offering an advantage in the Stockholm market, where current conventional passenger ferries have a 17% occupancy rate on average, meaning that a 300-passenger vessel carries only about 50 people on most trips.

The P-12 flies above the water surface on computer-guided hydrofoils, which reduce drag considerably. According to Candela, the P-12 consumes about 3-4 kWh per nautical mile, which is one tenth of a conventional ferry and comparable to the energy consumption of a modern electric-hybrid bus, making it the most energy efficient fast ferry ever built.

“Waterways are fantastic transport corridors, but they’re very much forgotten in the discussion about how to make urban transport more sustainable. If you can make vessels that are faster than cars and buses during rush hour traffic, that use very little energy and have low operational costs, we can unlock the potential of our waterways for mass transit, says Erik Eklund, chief executive for commercial vessels at Candela Technology.

Candela says the P-12 can operate in urban waterways at higher speeds than traditional passenger boats because it creates virtually no wake. The higher service speeds will allow the new P-12 shuttle passengers farther and faster.

“On many routes, we can increase departure frequency from one departure an hour to one every 10 minutes, while lowering the costs,” says Eklund,

Additionally, says Candela, the P-12  ferry will also offer superior passenger comfort and seakeeping from its Flight controller, a computer that analyzes the boat’s pitch and roll a hundred times a second and automatically adjusts the foils to keep it level above the waves.