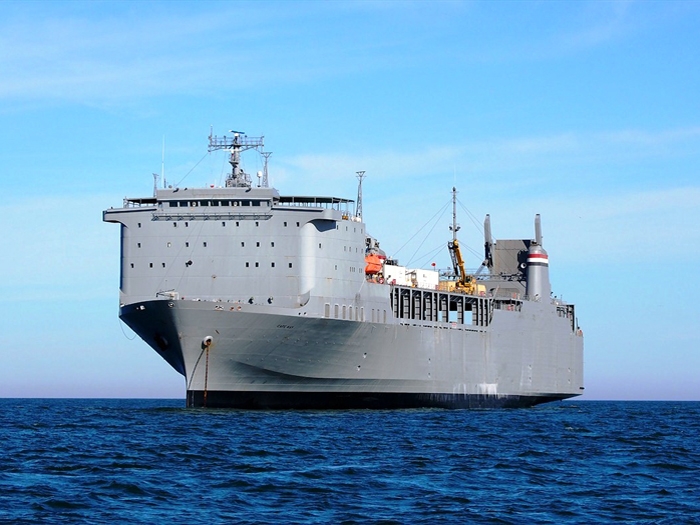 JULY 2, 2014—A specially outfitted U.S. Ready Reserve Force Roll-On/Roll-Off/container ship is sailing to the Port of Gioia Tauro in Calabria, Italy, where she will be loaded with 530 tons of chemical weapons from Syria for destruction at sea.

On the U.S. Department of Transportation blog yesterday, Maritime Administrator Paul “Chip” Jaenichen posted that the ship, the 648 ft M/V Cape Ray, “was the United States’ key contribution to the joint Organization for the Prohibition of Chemical Weapons (OPCW)/United Nations international effort to eliminate the Syrian stockpile of chemical weapons, and it provides the latest reminder of the important role America’s merchant mariners play in supporting our national security as well as our economy.”

The M/V Cape Ray (T-AKR 9679) is part of the U.S. Ready Reserve Force (RRF), a fleet managed by the Maritime Administration (MarAd), to provide for rapid mass movement of Department of Defense (DOD) equipment and supplies to support U.S. Armed Forces and respond to national and humanitarian emergencies. Each vessel in the fleet is maintained to remain in a state of readiness so that a full activation can be achieved quickly and the ship certified as mission ready. In nearly every case, MarAd completes RRF vessel activation in five days or less.

Wrote the Maritime Administrator: “This level of readiness was the reason the Cape Ray, the assigned ship manager, Keystone Shipping Services, Inc., and the all-volunteer U.S. Merchant Marine crew were able to prepare for this historic mission in a very short time.

“Converting a sealift vessel into an OPCW-verified chemical weapons destruction facility was no easy task, given the scope of the mission, the number of government agencies and commercial companies involved, and the extensive vessel modifications required. Without question, this was a first of its kind project for the U.S. Department of Transportation.

Once modifications were completed, extensive in-port and at-sea testing were conducted. A diverse team from more than 20 different organizations worked tirelessly to test and improve the vessel’s capabilities to ensure that chemical weapons could be handled and neutralized safely. Measures were also put in place to ensure there would be no impact on the environment or harmful effects on human life when the M/V Cape Ray returns stateside.”