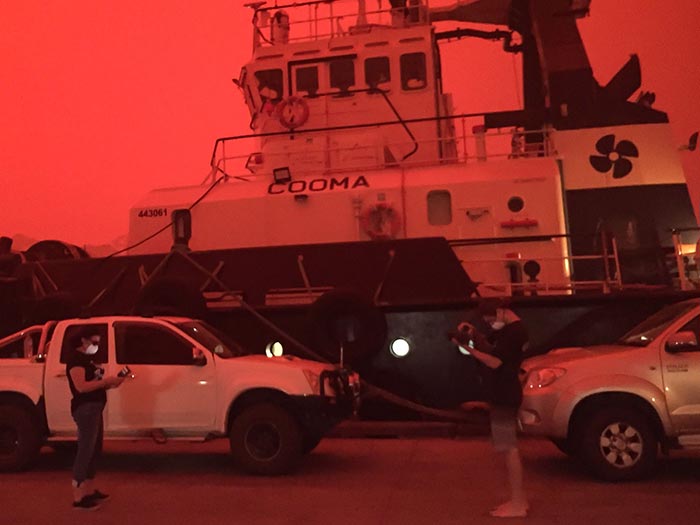 As the bushfire crisis accelerated across Australia over the weekend of January 4-5, 2020, the Svitzer team in Eden, New South Wales, played a significant role in the response.

Svitzer Australia has a long-standing towage, lines and pilot operation in Eden, which was directly in the line of the approaching blaze.

“The team in Eden rose to the threat and worked incredibly hard to provide practical support to the NSW Rural Fire Service (RFS) and the local community,” says Svitzer.

The team coordinated with the RFS to offer transport to firefighters across Twofold Bay, and multiple emergency callouts were completed by Svitzer pilot boat, Mersey. The support also took form in the offer of 20,000 liters of diesel to the RFS, which ultimately was not required, but remains on offer over the period of the bushfire crisis.

Meantime, the Svitzer tugboats Cooma and Wistari became a haven for many people sheltering on Eden Wharf.

More than 80 residents, aged between six months and 92 years old, and 12 dogs, took shelter on the vessels. The team kept morale high with coloring competitions and card games, with enough food brought onboard to last a month.

As of yesterday, says Svitzer, fires continued to burn in the area offering a potential threat.

“Our tugboats are standing by to offer assistance as and when required,” says the company. “We will continue to work with local authorities to offer practical support as needed.”

Svitzer reports that its response to the crisis extended to Victoria.

Svitzer tugs have been assisting the Royal Australia Navy bringing in evacuees from Mallacoota, Victoria on HMAS Choules and MV Sycamore.

Svitzer donated its services as a way of supporting those displaced by the fires and remains on standby to assist the Navy bring in evacuees from Mallacoota.