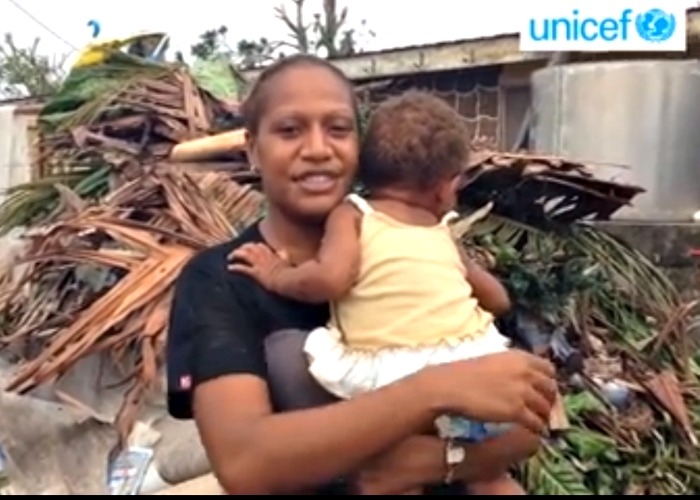 UNICEF is calling for nearly $5 million to help the children of Vanuatu, following the devastating effects of Cyclone Pam that have left 70 percent of the population of the tiny island nation homeless

MARCH 25, 2015—Thousands are homeless and at least 17 people are dead in Vanuatu, in the wake of the deadly Cyclone Pam that struck the tiny nation on March 13. Relief efforts are underway to rebuild Vanuatu, which is an archipelago of 83 islands in the Southwest Pacific, about 1,000 miles east of Australia.

Vanuatu has a population of about 200,000, of which 30,000 live in the capital Port Villa. Some reports say about 70 percent of the country’s population is homeless and fresh water and food supplies are scarce.

On March 23, the Prime Minister of Vanuatu, Joe Natuman, and the United Nations Humanitarian Coordinator for the Country, Osnat Lubrani, appealed for nearly $30 million to cover the needs of the 166,000 people affected by tropical cyclone Pam.

The funds will ensure that those in need can receive assistance until mid-June of this year. The support will be in the areas of water, food, shelter and health care, as well as protecting the vulnerable and helping children return to school.

“The people affected by Tropical Cyclone Pam face serious immediate risks to their health and wellbeing, as well as threats to their livelihoods and future resilience to disasters,” says Ms. Lubrani.

As part of the new appeal, the UN Children’s Fund (UNICEF) is calling for nearly $5 million to help the 82,000 children who are in need of humanitarian assistance.  That is two thirds of all children in Vanuatu.

UNICEF is focusing on ensuring that children in Vanuatu, as well as neighboring Tuvalu, Solomon Islands and Kiribati, have access to clean water, sanitation and health services.