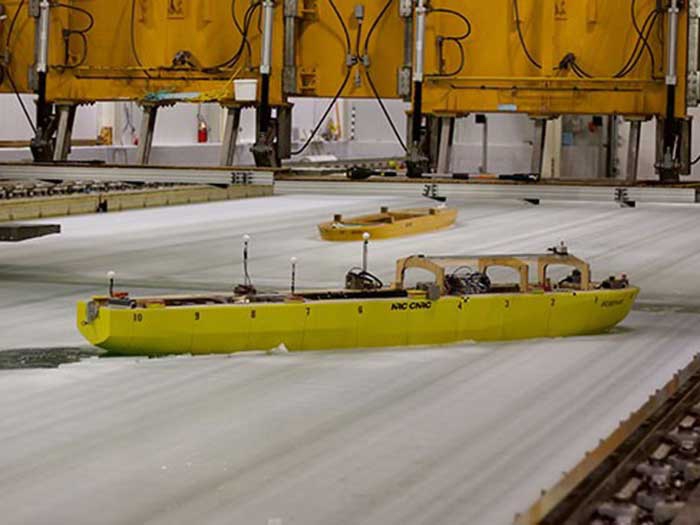 The National Research Council of Canada's laboratory in St. John's is home to one of the world's largest ice tank facilities

JULY 26, 2017 — The National Research Council of Canada (NRC) is playing an important role in helping define requirements for the U.S. Coast Guard’s next polar icebreaker. Today, the NRC hosted representatives of the U.S. Coast Guard, U.S. Department of Homeland Security Science & Technology Directorate, and the U.S. Navy at its St. John’s, Newfoundland, facility to discuss and showcase progress made on the testing and evaluation of design models for the U.S. heavy polar icebreaker acquisition program.

During this phase, the NRC is conducting environmental characterization of ice conditions using physical modeling from its ice tank.

The testing is assessing the models’ maneuverability in ice and icebreaking resistance, building baseline requirements for new U.S. heavy polar icebreakers, and expanding the current design and operational knowledge.

The National Research Council of Canada’s laboratory in St. John’s is home to one of the world’s largest ice tank facilities used to measure the performance and evaluate the safety of ice-going ships and structures in controlled model-scale conditions. The ice tank models a wide range of marine ice conditions, including first-year and multiyear ice, pack ice, ridged ice and glacial ice. The NRC’s ice tank is the second longest ice tank in the world – measuring 90 metres long. If you laid it on its side, the U.S. Statue of Liberty or the Peace Tower on Canada’s Parliament Hill would run the same length.

The NRC has been preparing models and testing icebreakers and other vessels for more than 50 years and boasts more than 30 years of data, model testing expertise, and validation in Arctic conditions.

The Canadian and U.S. governments are also working on the long-term management of the polar icebreaker’s hull integrity, which they will assess through field trials

“This collaboration benefits both countries as they engage in vital research and development to improve the technology of icebreaking ships,” said Iain Stewart, President of the NRC. “Our knowledge of how ships and offshore structures can operate in harsh environmental conditions combined with our world-class research facilities and expertise positions Canada as a strategic partner in providing safety and efficiency to the new U.S. polar icebreakers.”

“Model testing activities enable us to examine critical design elements and make informed design decisions early in the acquisition process,” said Rear Admiral Michael Haycock, U.S. Coast Guard Assistant Commandant for Acquisition and Chief Acquisition Officer. “The data we gather from model testing at the NRC is going to be a major driver of our heavy polar icebreaker acquisition program’s success and will be critical to our efforts to effectively manage costs, mitigate risks, and maintain an accelerated program schedule.”

“This is a wonderful example of international and cross-component collaboration,” said DHS Under Secretary (Acting) for Science and Technology William N. Bryan. “Supporting the operational mission of DHS is why Science & Technology exists. In this case, I am particularly proud that S&T is able to work with our neighbors to the north and bring their expertise to bear on supporting the mission of the Coast Guard.”