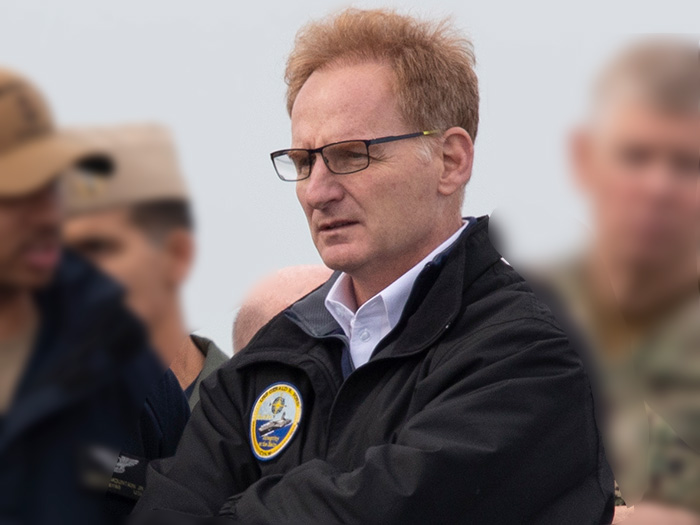 There had been calls for Modly’s removal by several leading members of Congress. Those came after a series of events that began when the aircraft carrier Theodore Roosevelt arrived in Guam Mar. 27 for a scheduled port visit. Prior to the port visit three sailors aboard the ship tested positive for COVID-19. As the outbreak aboard the ship developed its commander, Captain Brett Crozier, wrote a letter, date March 30, to senior Navy officials asking for assistance in dealing with the situation. That letter then got leaked to the San Francisco Chronicle, which published its text March 31 (you can read it HERE).

In a statement, Modly said: “I did not come to this decision lightly. I have no doubt in my mind that Captain Crozier did what he thought was in the best interests of the safety and well-being of his crew. Unfortunately, it did the opposite. It unnecessarily raised alarms with the families of our Sailors and Marines with no plan to address those concerns. It raised concerns about the operational capabilities and operational security of the ship that could have emboldened our adversaries to seek advantage, and it undermined the chain of command who had been moving and adjusting as rapidly as possible to get him the help he needed.”

Things escalated when video went viral on social media showing Captain Crozier, who himself has now tested positive for COVID-19, being applauded by members of the carrier’s crew as he left the vessel.

On Monday, April 6, Modly flew to Guam and addressed the ship’s crew in remarks that were not well-received. Following is excerpted from a transcript published by CNN:

If he didn’t think—it was my opinion, that if he didn’t think that information was going to get out into the public, in this information age that we live in, then he was A, too naive or too stupid to be the commanding officer of a ship like this. The alternative is that he did this on purpose. And that’s a serious violation of the Uniform Code of Military Justice, which you are all familiar with. That message, and all the contents of that message was perfectly fine for him to send to people in his chain of command in a confidential way so they could get acting on it. He in fact could have given it to me, through my Chief of Staff, or to me, as I asked him to do when I first reached out to him on the ship, when we first found out that there were COVID cases here.

It was a betrayal oftrust with me, with his chain of command, with you, with the 800 to a thousand people who are your shipmates on shore right now, busting their asses every day to do what they need to do to convert what they do in a normal day to get you guys off of here, get you safe and get you healthy, get you clean, and get you back on this ship where you are supposed to be.
(INDISTINCT YELLING IN BACKGROUND)

It was betrayal. And I can tell you one other thing: because he did that, he put it in the public’s forum, and it’s now become a big controversy in Washington, DC, and across the country [LOW BACKGROUND YELLING: HE WAS ONLY TRYING TO HELP US] about a martyr CO, who wasn’t getting the help he needed and therefore had to go through the Chain of Command, a chain of command which includes the media. And I’m gonna tell you something, all of you. There is never a situation where you should consider the media a part of your chain of command. You can jump the Chain of Command if you want, and take the consequences, you can disobey the chain of command and take the consequences, but there is no, no situation where you go to the media. Because the media has an agenda. And the agenda that they have depends on which side of the political aisle they sit. And I’m sorry that’s the way the country is now, but it’s the truth. And so they use it to divide us. They use it to embarrass the Navy. They use it to embarrass you. (INDISTINCT YELLING IN BACKGROUND)

Later that day, Modly issued an apology in which he said.:

“I want to apologize to the Navy for my recent comments to the crew of the TR,” Modly said. “Let me be clear: I do not think Captain Brett Crozier is naïve nor stupid. I think, and always believed him to be the opposite.

“We pick our carrier commanding officers with great care. Captain Crozier is smart and passionate. I believe, precisely because he is not naive and stupid, that he sent his alarming email with the intention of getting it into the public domain in an effort to draw public attention to the situation on his ship.”