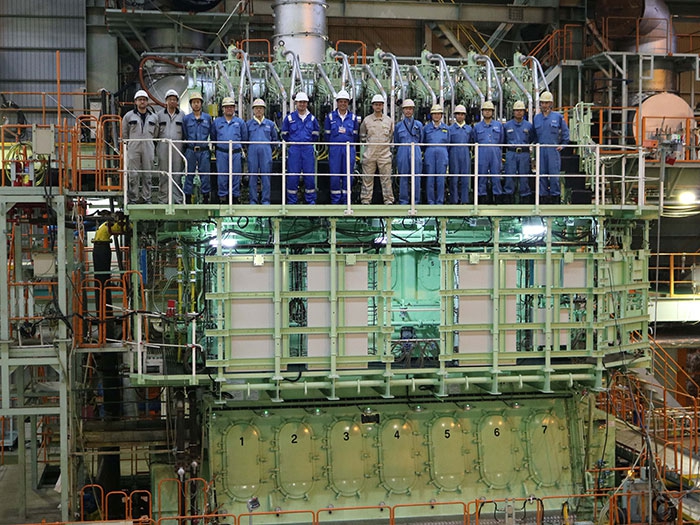 The Mitsui-MAN B&W 7G50ME-C9.5-GIE engine is the first of a series of three for installation in three LEG (liquefied ethylene gas) carriers of 36,000 cu.m or Hartmann Schiffahrt of Germany and Ocean Yield of Norway, being built by Chinese shipbuilder Sinopacific Offshore Engineering (SOE).

Ethane was chosen as fuel, in preference to HFO, due to its more competitive pricing as well as the significantly shorter bunkering time it entails, says MAN Diesel & Turbo, adding that, as a fuel, its emissions profile is also superior to HFO – in which respect it is similar to methane – and compared to HFO contains negligible sulfur and 15-20% lower CO2.

MAN Diesel & Turbo also verified methane operation on this engine type and says that the ME-GI engines will be set up so that they can easily be converted to run on methane as an alternative.MAN Diesel & Turbo currently has eight ME-GIE engines on order.

The ME-GI engine uses high-pressure gas injection that allows it to maintain the numerous positive attributes of MAN B&W low-speed engines that have made them the default choice of the maritime community.

Ethylene carriers are generally considered the most sophisticated of all gas tankers and are capable of carrying most liquefied gas cargoes, but also ethylene at its atmospheric boiling point of −104°C. These vessels have insulated 5% nickel-steel cargo tanks and can accommodate most liquefied gas cargoes up to a maximum specific gravity of 1.8 at temperatures ranging from −104°C to +80°C at a maximum tank pressure of 4 bar.