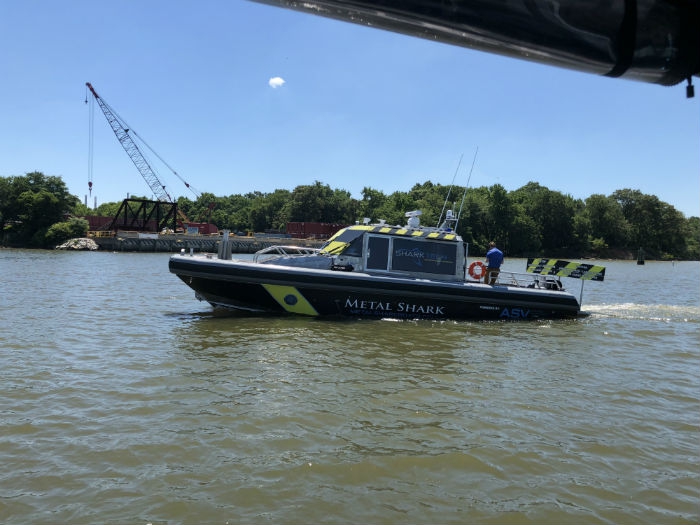 JULY 29, 2018 —The Multi-Agency Craft Conference (MACC) offers an annual glimpse into the future of the U.S. military and government agency patrol boat market, creating a valuable opportunity for marine suppliers to network with key procurement and decision-making officials at the Navy and Coast Guard.

This year’s edition, MACC 2018, was no exception. Held by ASNE July 18-19 at the Coast Guard Yard in Curtis Bay, MD, it drew exhibitors from around the world inside an air-conditioned, tented pavilion. “It is an excellent opportunity for us to interact with U.S. Navy and Coast Guard personnel,” says Bill Blount, International Business Development, Manager, Vigor. “We’re under contract for the CCM for SOCOM (U.S. Special Operations Command) and we’re also under contract for the MSVL, the Army’s new landing craft program, and we continue to support the Coast Guard with RB-M maintenance and support.”

The CCM or Combatant Craft Medium, is a stealthy, 50+ knot boat that can be transported by the C-17A Globemaster III aircraft or deployed by large surface ships, such as LPDs and LHDs to transport U.S. Navy SEALs and special ops personnel.

Bill Blount, Vigor’s International Business Development Manager (photo at right), is optimism about growth in the international military vessel market over the next two to five years

Portland, OR-headquartered Vigor typically builds boats in a range from about 40 to about 200 feet in length, says Blount. He sees international sales is a promising area of growth. “That’s probably the biggest area of development over the next two to five years. Right now, we’re focusing on foreign military sales for the RB-M platform, since the U.S. Coast Guard has received 174 of the platforms for themselves.”

International Navy and Coast Guard sales are also critical to Sweden-headquartered propulsion specialist Marine Jet Power (MJP). “South Korea is one of our largest customers. We’re working with both their Navy and Coast Guard,” says Douglas Natoce, President of Americas, Marine Jet Power. “We acquired and merged with UltraJet and now have a complete line of jets for everything from high-speed ferries to military operations to small workboats. MJP has ferry projects around the world and is on the U.S. Army’s landing craft project and U.S. Coast Guard long-range interceptors.” It has also partnered with Spencer Yachts on the first high-speed sportfishing vessel, “taking the sport industry to a whole new level,” says Natoce.

Natoce was excited about MJP’s new X Series, unveiled earlier this month at SeaWork International exhibition in Southampton, UK. “With our new X series, we already have over 1.8 million hours on the pump—it’s astounding. The ability to bring to the U.S. Navy, Coast Guard, and the other military branches this new innovative product is huge. Along with its new design, the jets are lighter, more efficient, and are specifically designed around today’s evolving diesel engines.”

Leah Yam (shown at right). Yam, the communications manager for the San Diego-based shipyard, says the company is building a patrol boat for Jordan, as well as new 60 ft dive boats for the U.S. Navy.

Marine Group Boat Works’ Leah Yam (shown at right) uses MACC as an important networking opportunity to meet with officials that procure military and government agency boats, as well as to gather intelligence on future programs

“We have two locations, one of which is solar powered facility. Both locations build and repair boats of all sectors—so you might see a super yacht, barge, tugboat or military craft,” she says. MGBW, for example, is also performing an extensive, $4 million midlife refurbishment on the M/V Peralta, a 34m WETA ferry that will “give it a fresh new look.”

Yam believes MACC is important because the during the show’s presentations “we get to hear what types of procurements are coming up for 2018 through as far as 2022. I can talk and interact with people that have procured boats and as a way to catch up on what’s happening in the bidding process.”

MACC, says Hank Morgan, Sales Manager, Karl Senner, LLC, Kenner, LA, is a great way to solidify the company’s government contacts. The family-owned Karl Senner is a major supplier and after-sales service provider in North America for propulsion equipment for commercial and military vessels. Morgan sees an uptick in business, particularly on the inland river and government markets. “We are working several projects in hybrid and diesel electric propulsion” for the inland market, he adds.

Karl Senner LLC’s Hank Morgan (photo at left) sees an uptick in business on the inland waterways, as well as in the military vessel market

STEP ON BOARD
Another important aspect of a MACC event is the in-water boat demonstrations. Evinrude, Safe Boats International, Metal Shark, Metalcraft Marine, Inc., the U.S. Coast Guard, and Zodiac Milpro all participated.

Jeanerette, LA-based Metal Shark brought three boats to the show, says Josh Stickles, Metal Sharks’ Vice President, Marketing. One of the most talked about topics these days is the use of autonomous or unmanned vessels. Attendees were treated to a peek at the future: Metal Shark’s cutting-edge Sharktech autonomous vessel technology. It partnered with a proven leader in unmanned vessel technology, ASV Global, to be able to offer various levels of autonomy across it portfolio. Now, Metal Shark can customize Sharktech autonomous technology on vessels ranging from 16 to over 300 ft in length in aluminum, steel or composite configured for a full range of military, law enforcement, fire rescue, and commercial applications built at one of its three facilities.

As you might recall, Metal Shark recently expanded through its acquisition of Horizon Shipbuilding in Bayou La Batre, AL. Besides its boat production facility in Jeanerette, Metal Shark also has a shipyard in Franklin, LA.

Josh Stickles, Metal Sharks’ Vice President, Marketing (photo at right) said the shipbuilder was using MACC 2018 to unveil its new Sharktech autonomous vessel technology, which will be available for both military and commercial applications

To showcase the new technology, Metal Shark and ASV Global demonstrated a Sharktech-equipped Metal Shark 38 Defiant patrol boat at MACC 2018. The Sharktech demo vessel showcases multiple layers of autonomy, as it also carries a Shearwater aerial drone from Planck Aerosystems that may be launched, flown, and landed autonomously from the moving vessel thanks to an integrated navigation and guidance system.

Last year, Metal Shark reeled in one of the highest profile, most fiercely contested contracts from the Navy—the PB(X) patrol boat for the U.S. Navy Expeditionary Combat Command—with a potential value of over $90 million. The 40 ft, welded-aluminum pilothouse patrol boat was designed by Metal Shark’s in-house engineering team. The PB(X) has a chiseled, angular profile and a faceted hull, with propulsion supplied by twin diesel inboards driving waterjet propulsors.

HamiltonJet’s Area Sales Manager Ace Backer says his company’s new HTX-30 waterjet will be on the Navy’s PB(X) patrol boat. The new propulsor is part of ”a new line of waterjets that are more robust, have a greater thrust than older models, are more corrosion resistant, and have less maintenance. Overall, they are a better value for the customer,” says Backer. We’re also introducing a new line of electronic controls called AVX. They’re waterproof and a more robust product,” he adds.