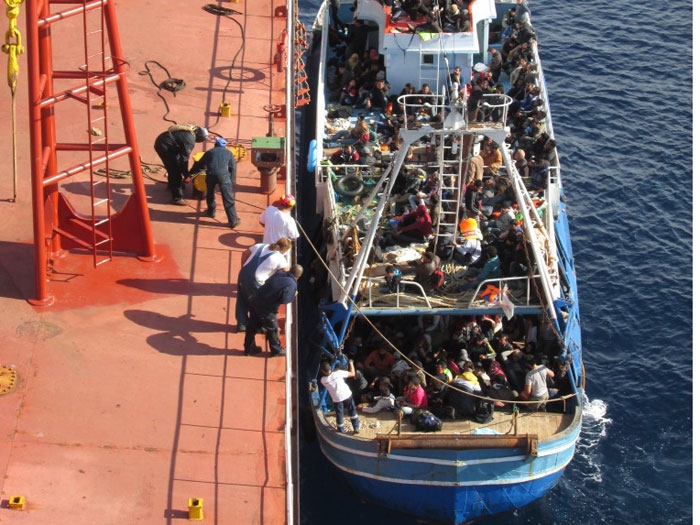 NOVEMBER 25, 2014 — The 50,601 dwt U.S.-flag bulker Liberty Grace was recently involved in the rescue of more than 230 Syrian refugees from a a Turkish fishing trawler that was adrift 120 nautical miles southeast of Sicily.

Liberty Maritime, Lake Success, NY, reports that Liberty Grace was transiting in ballast from the Suez Canal to Galveston, TX when she was directed by the Italian Coast Guard to render assistance to the refugees.

At 0910 hrs November 17, Liberty Grace was on station and began boarding the 230+ refugees, who included some 65 women and children.

The Italian Coast Guard remained on site watching the boarding, for the safety and security of the crew of Liberty Grace as well as for safe embarkation of the refugees.

The crew of the Liberty Grace established a feeding station on deck to provided food and water to the exhausted refugees. The vessel also provided blankets and clothing to those in need.

Some of the refugees said they were doctors, engineers and other professionals, all seeking to escape Syria’s war torn towns of Aleppo, Homs and others.
They said that the Captain and crew of the Turkish trawler set them on a course towards Italy and then deserted the refugees by embarking onto speed boats.

On November 18, 2014 all refugees safely disembarked at Porto Empedocle, Sicily where they were received on shore by United Nations High Council for Refugees along with the Red Cross and medical volunteers.