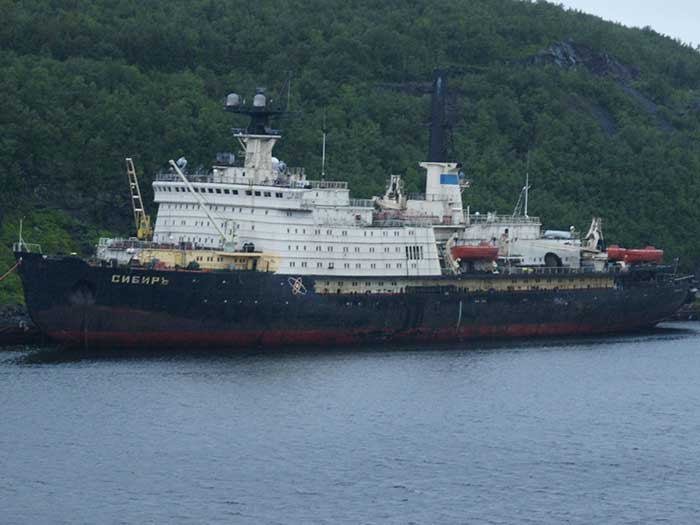 The icebreaker, which was built at the Baltic Shipyard and launched in 1978, was retired from service in 1993. No funding was allocated for its dismantling, however, until the Russian government approved a Federal Target Program for 2016 to 2030 with funding for guaranteeing radiation safety.

Andrei Zolotkov, a nuclear expert with Bellona, says that while Russia has lots of experience with dismantling submarines, taking apart a nuclear icebreaker is “emblematic.”

Bellona reports Mustafa Kashka, Atomflot’s chief engineer, as saying that towing the vessel to Nerpa presented special safety concerns and that the Sibir was subjected to a comprehensive engineering and radiological survey to determine that the vessel’s integrity was such that it could be towed to Nerpa.

He said the Sibir’s spent nuclear fuel was unloaded in 1993 and that the reactor had worked for more than 100,000 hours.

The Sibir was initially scheduled for towing to Nerpa on November 11, but that was delayed because the nuclear cleanup vessel Itarus is currently located at the shipyard.

Yevgeny Svidirov, Nerpa’s communications chief, told Bellona that the towing had been delayed for several days because of “navigational complexities” and that the Sibir would arrive as soon as possible.

The nuclear icebreakers Arktika and Rossiya are currently in cold shutdown and are expected to be dismantled with funding from the same federal target program covering the dismantling of the Sibir.

Atomflot is building of three new nuclear icebreakers that will take the place of those that will be dismantled and in some cases assume their names.

The hull of the lead ship, the Arktika, has already been laid and the next Sibir and the Ural are in different stages of construction, says Bellona.