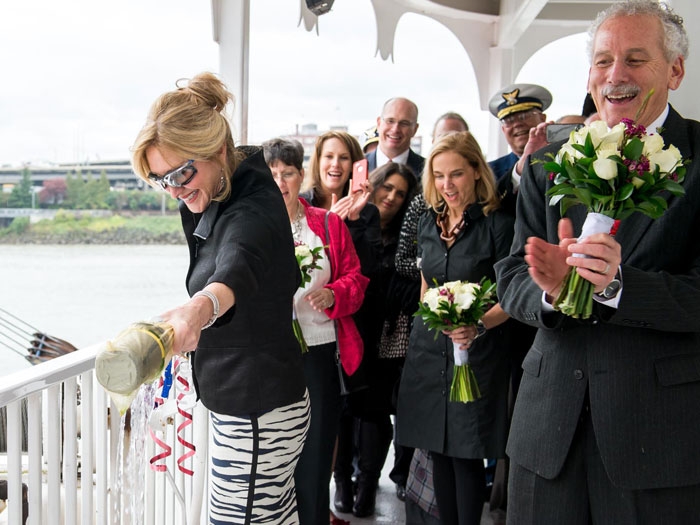 Claudette Waggoner, wife of chairman and CEO John Waggoner, served as godmother of the American Empress and broke the traditional bottle of wine on the hull.

“The overnight cruise business has been a dream of John’s and he is the most passionate man I know,” she said. “It is an honor to serve as the American Empress godmother and share his dream of this majestic vessel with all of you as she sails the Pacific Northwest.”

“This is a celebration of public-private partnership and the American dream being lived today right here in Portland,” said Secretary Ray LaHood.

Sam Robinson of the Chinook Nation blessed the vessel and the ceremony concluded with a wine presentation by Willamette Valley Vineyards to celebrate the line’s partnership with over 40 local wineries.

The U.S.-flagged American Empress was built in 2003 and operated by Majestic America Line from 2003 to 2008, sailing Alaska’s Inside Passage and the Pacific Northwest. The American Queen Steamboat Company purchased the riverboat from the U.S. Maritime Administration (MARAD) and has had a team onboard preparing for her launch on the Columbia and Snake Rivers since May 2013.

Formerly the Empress of the North, the American Empress delivers opulence on a grand scale, following in the pedigree of the line’s namesake riverboat American Queen.

Her maiden voyage will be a nine-day journey immersing guests in the splendor of the Columbia and Snake Rivers, departing from Vancouver U.S.A. Featured stops include some of the region’s most celebrated ports including Astoria, Ore.; Stevenson, Wash.; The Dalles, Ore.; Sacajawea State Park, Wash. and finally Clarkston, Wash. Complimentary shore excursions will be available in every port.