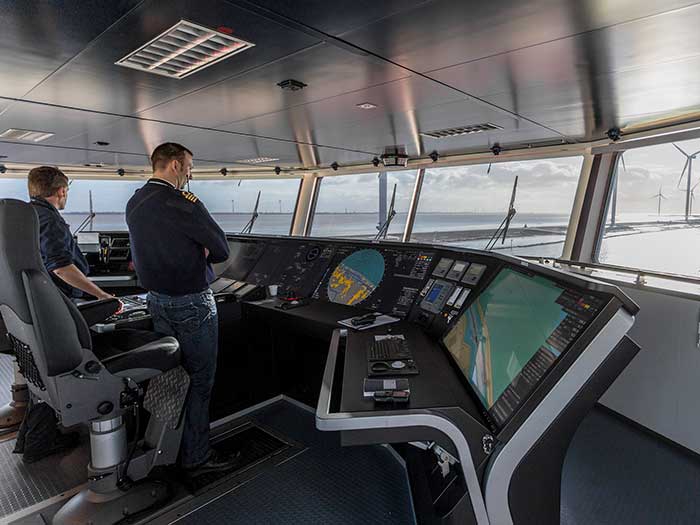 MAY 2, 2017 – Rotterdam based Alphatron Marine has delivered a state-of-the-art premium design AlphaBridge to the vessel Egbert Wagenborg. The ergonomically designed AlphaBridge with four 46-inch wide screens include remote support and an onboard information system.

Built by Royal Niestern Sander, the ice-strengthened open top is named for the founder of owner Royal Wagenborg. With a cargo capacity of over 14.000 tonnes and measuring 149 m in length and 15.90 in width, it is the largest vessel ever built at a shipyard situated on the landside of the dikes in the North of the Netherlands.

The Egbert Wagenborg navigation system reaches a new level of onboard safety with JRC’s latest multi-function radar, ECDIS and conning which is operated on four large extremely bright displays that can be seen from nearly every angle. The radar packages includes the new, and world’s smallest, 8 ft Solid State S-band scanner to. An alarm system and CCTV integration can be displayed both on board and back on shore.

The consoles were made by Eekels Technology, under license from Alphatron Marine. Accuracy and reliability are paramount to efficient operations, so great attention was given to ergonomics, safety, technology and the layout to ensure a safe working environment for crew and cargo.

This is first ever AlphaBridge delivered to Wagenborg and follows the latest thinking in ergonomics and class rules and has a 360-degree outside view with no line of sight restrictions.

The Egbert Wagenborg’s communication system features a fast satellite connection for onboard TV and internet, allowing the crew to communicate with family and friends back home. The Voyage Data Recorder (VDR) is also prepared to connect to the JRC Remote Maintenance System (RMS) and the JRC J-Marine Cloud web environment for efficient and preventive maintenance, support and advise.