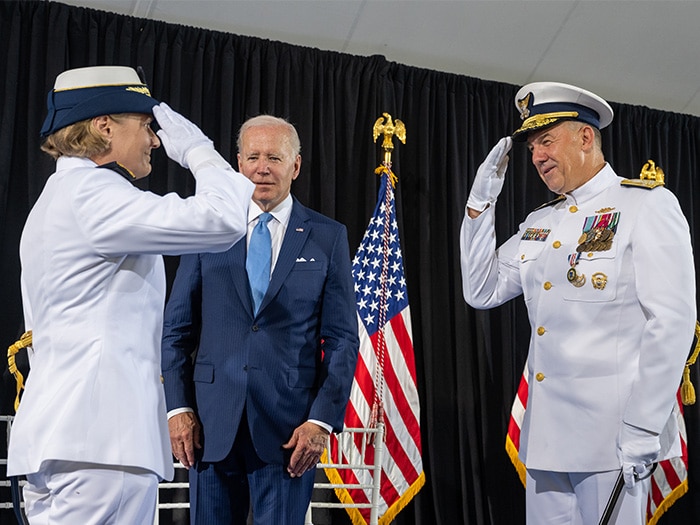 Adm. Linda Fagan relieved Adm. Karl Schultz as the 27th commandant of the Coast Guard during a change of command ceremony presided over by President Biden, June 1, 2022. Fagan is the first woman service chief of any U.S. military service. [DHS photo by Benjamin Applebaum]

Adm. Karl L. Schultz was relieved as commandant of the U.S. Coast Guard by Adm. Linda L. Fagan during a military change-of-command ceremony presided over by President Biden, Wednesday at Coast Guard Headquarters.

Immediately following the change-of-command, Schultz retired from the Coast Guard after 39 years of service. He was awarded the Homeland Security Distinguished Service Medal from Secretary Alejandro N. Mayorkas, Department of Homeland Security.

“The men and women of the Coast Guard deserve all the credit for what we have accomplished,” said Schultz. “I’m humbled to have led the world’s best Coast Guard as commandant during the last four years, which presented some unique challenges. Our collective resolve, bias for action, unrivalled devotion to duty, true grit and dogged determination burnished the Service’s brand and standing, both in the homeland and abroad.”

Schultz became the 26th commandant of the U.S. Coast Guard on June 1, 2018. During his four-year tenure, Schultz championed a “readiness narrative” that raised the service’s funding levels allowing renewed internal focus on the Coast Guard’s workforce, as well as significant shipbuilding and aviation asset recapitalization, and a signature Technical Revolution.

Fagan assumed the duties as the 27th commandant following her service as the 32nd vice commandant. In that role she served as the service’s chief operating officer, responsible for executing the commandant’s strategic intent, managing internal organizational governance, and serving as the component acquisition executive. Fagan is the Coast Guard’s first woman to hold the rank of four-star admiral. Today, she again made history not only as the first woman to lead the Coast Guard—but also as the first woman Service Chief of any U.S. military service.

“The Coast Guard is a more ready, relevant, and responsive service thanks to the incredible leadership of Admiral Schultz,” said Fagan. “I thank Admiral Schultz and Mrs. Dawn Schultz for their selfless service over the last four years and wish them fair winds and following seas.”