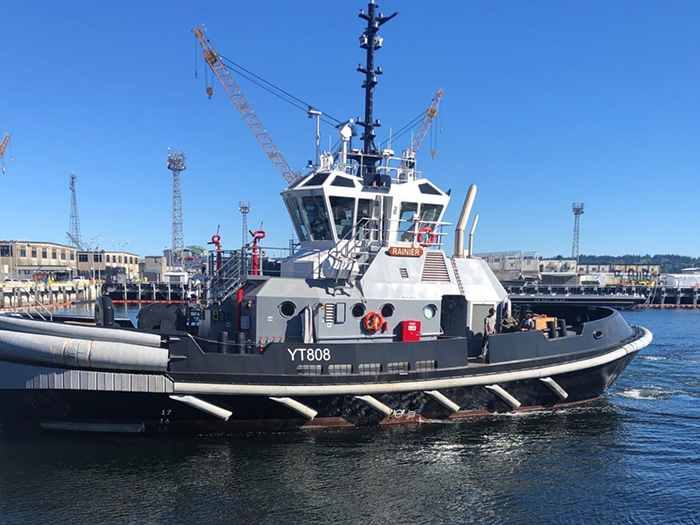 The tugs are being built by the Dakota Creek Industries shipyard in Anacortes, Wash. The first was launched earlier this year in October after completing the last construction phase.

“We are honored to be the Navy’s engine of choice in their newest tug fleet. The proven performance and reliability of the 3512E engines will ensure the YT 808 tugs are ready to perform their mission of assisting Navy ships and submarines in and out of port,” said Caterpillar Marine Governmental Technical Lead, Scott Roberts.

The use of the Tier 4 compliant 3512E engines will drastically reduce emissions at the naval installations where they operate. The YT 808’s will replace the Navy’s 45 – 55-year-old YTB class tugs at the Portsmouth Naval Shipyard in Maine and the Pacific Northwest.

Caterpillar Marine says that Cat Tier 4 engines are now working in dozens of new tugs around the Unites States, with the first Navy YT 808 being the latest Cat powered Tier 4 tug to go into service, as it is already performing its mission for the U.S. Navy at Naval Base Kitsap in the Puget Sound.

Caterpillar Marine says it aims to deliver the highest service excellence for customers providing them with peace of mind to focus on their operations. The new engines installed in the vessels will receive support from the worldwide Cat dealer network, ready to assist and manage the engines’ performance to prevent downtime.

“Our goal is to provide customers with high-performing equipment and solutions that are easy to own, operate, and maintain. With digital solutions, customers can monitor engine health and review engine history data and early warning signs to allow proper intervention before failure,” said Roberts.