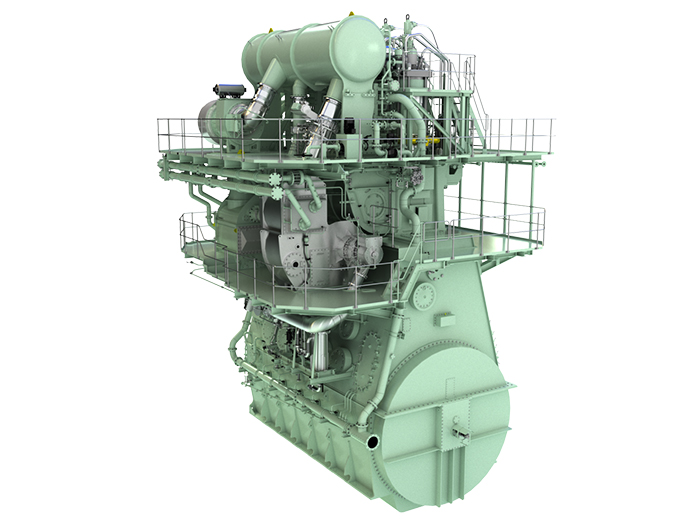 MAN Energy Solutions is to offer its proprietary EGR (Exhaust Gas Recirculation) system as an emissions solution for its new, low-speed ME-GA engine, the Otto-cycle variant of its established ME-GI dual-fuel engine.

The high efficiency, low-pressure, two-stroke, dual-fuel MAN B&W ME-GA engine is being developed at the company’s Research Center Copenhagen. The engine delivers a low CAPEX solution aimed at certain vessel types and applications – such as LNG carriers – that are able to use boil-off gas as a source of fuel, or smaller ships where low capital outlay is a priority.

Based on the well-proven MAN B&W dual-fuel design with minimal installation requirements, the MAN B&W ME-GA uses an efficient ignition concept and a unique gas-admission system that delivers safe and reliable operation.

The company expects to deliver the first commercial ME-GA low-pressure dual-fuel engine by end-2021 and plans to make the EGR option available from late 2021, concurrent with the introduction of the engine.

MAN Energy Solutions says that, in addition to enabling the engine to meet Tier III requirements in both fuel oil and gas modest, EGR will help reduce the ME-GA’s methane slip by 30 to 50%, while lowering specific gas consumption by around 3% and specific fuel-oil consumption in diesel mode by 5%. EGR will also solve the issue of pre-ignition on Otto-cycle engines.

MAN has long experience with the technology and booked its first order for an EGR system in 2011 when it was fully integrated within the MAN B&W 6S80ME-C9 main engine of a 4,500 TEU containership newbuilding. Since then it has received orders for over 241 engines with EGR, with more than 33 units already in service.

“Nine years have passed since our very first EGR system passed its Factory Acceptance Test, and the knowledge we have subsequently gained in the field has led to today’s fully-mature solution,” said Thomas S. Hansen, Head of Promotion and Customer Support, MAN Energy Solutions. “Our EGR system not only achieves NOx-compliance, but also delivers a performance upgrade for both conventional and now ME-GA engines.”

The ME-GA EGR solution is a high-pressure system, which can be integrated into existing engine-room designs, and the EGR unit itself does not change the engine footprint. Its design-similarity to that of ME-C engines’ EGR systems will lower its price point, since the supply chain and components are already matured.

The volume requirements of the ME-GA EGR system are significantly lower with, for example, less pipework required than for low-pressure EGR solutions.

Introducing an EGR solution also improves the stability of the combustion process, says MAN Energy Solutions, which is currently researching how far it can lower methane slip while maintaining a good equilibrium with recirculation.