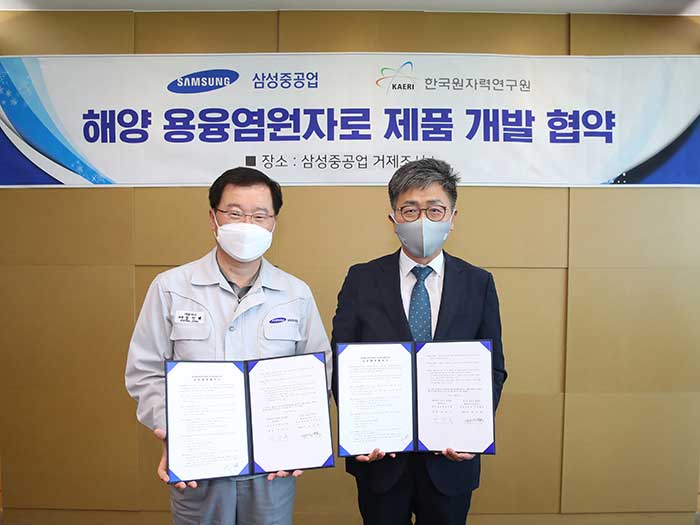 One of the world’s largest shipbuilders is to explore the possibility of nuclear power as a viable path to shipping decarbonization. Samsung Heavy Industries (SHI) has signed a nuclear power plant technology development agreement with Korea Atomic Energy Research Institute (KAERI) that will research molten salt water reactor (MSR) technology for both floating nuclear power plants and the propulsion of commercial ships.

Samsung Heavy says the SMR reactors that will be researched as small module reactor using molten fluoride salts as the primary coolant, at low pressure.

This is the same reactor technology that London-based Core Power (UK) Ltd. is developing as “atomic battery packs” for ships (see earlier story) that are very different from the fuel rods that were used in the world’s first nuclear merchant ship, the NS Savannah.

According to Samsung, the use cycle of nuclear fuel is “more than 20 years, which is the same as the life cycle of a ship, so there is no need to replace [the SMR] after being installed.”

“In addition,” the company adds, “if an abnormal signal occurs inside the reactor, it is designed to solidify the molten salt, the liquid nuclear fuel, to prevent serious accidents at the source, providing high safety.”

Jin-taek Jeong said, “MSR is a carbon-free energy source that can efficiently respond to climate change issues and is a next-generation technology that meets the vision of Samsung Heavy Industries.”