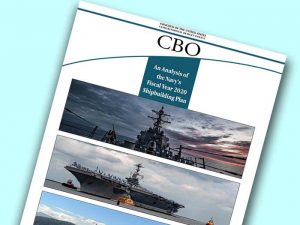 The U.S. Navy and the nonpartisan Congressional Budget Office (CBO) seem to just count things differently. Inevitably, the CBO finds that the Navy lowballs the estimated costs of its shipbuilding plans. In 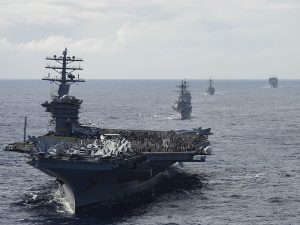 MARCH 15, 2018 — A new report from the Congressional Budget Office estimates that the costs of achieving a 355 ship Navy under two different approaches would average over $100 billion annually 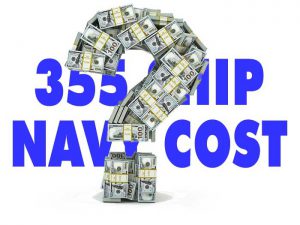 APRIL 24, 2017 — A new report from the Congressional Budget Office estimates that, over the next 30 years, meeting the 355-ship objective called for in the new Navy force structure assessment 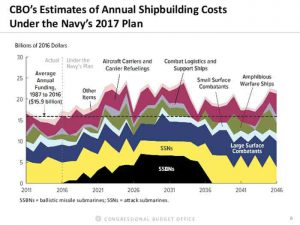 JANUARY 4, 2017 — Shipbuilders and the Navy are hopeful that the incoming Trump administration will make good on a campaign commitment to a 350 ship Navy. However, the non-partisan Congressional Budget 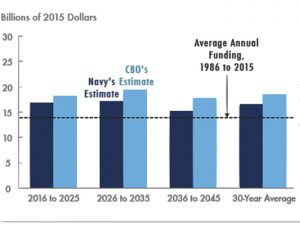 Here’s how the CBO see things.

CBO says it estimates that the cost of the Navy’s 2016 shipbuilding plan—an average of about $20 billion  per year (adjusted for inflation) over 30 years—would be $4 billion higher than the funding that the Navy has received in recent decades.

The Department of Defense (DoD) submitted the Navy’s 2016 shipbuilding plan for fiscal years 2016 to 2045 in April 2015. The $20 billion total annual cost of carrying out the 2016 plan over the next 30 years, CBO estimates—would be one-third more than the amount the Navy has received in Congressional appropriations for shipbuilding in recent decades.

The Navy’s 2016 shipbuilding plan, says CBO, is similar to its 2015 plan with respect to the goal for the total number of battle force ships, the number and types of ships the Navy would purchase, and the funding proposed to implement its plans.

The Navy’s 2016 shipbuilding plan states that the service’s goal (in military parlance, its requirement) is to have 308 battle force ships, consisting of aircraft carriers, submarines, surface combatants, amphibious ships, combat logistics ships, and some support ships. The 2016 shipbuilding plan falls short of the goals for some types of ships in some years, although generally the shortfalls are smaller than they have been in previous years’ plans. The fleet today numbers 273 ships.Under the 2016 plan, the Navy would buy a total of 264 ships over the 2016–2045 period: 218 combat ships and 46 combat logistics and support ships.

The size of the Navy does not depend on ship construction alone; the length of time that particular ships remain in the fleet affects the force structure as well. The CBO notes that the Navy often shows flexibility in its approach to retiring ships: A ship may be retired before the end of its service life to save money or may be kept beyond that span to maintain a desired force level. Generally, the Navy’s estimates of expected service life align with historical experience.
However, the Navy currently assumes a 35- or 40-year service life for its large surface combatants; in the past, few of those ships were in the fleet for longer than 30 years.

CBO Estimates That Spending for New Ships in the Navy’s Plan Would Average $18.4 Billion per Year

The Navy estimates that buying the new ships specified in the 2016 plan would cost $494 billion (in 2015 dollars) over 30 years—or an average of $16.5 billion per year—slightly less than the costs of the 2015 plan. Using its own models and assumptions, CBO estimates that the cost of new-ship construction in the Navy’s 2016 plan would total $552 billion over 30 years, or an average of $18.4 billion per year.

CBO’s estimates are higher because the Navy and CBO use different estimating methods and assumptions regarding future ships’ design and capabilities and treat growth in the costs of labor and materials for building ships differently.

The difference widens over time in part because the Navy’s method of developing constant-dollar estimates (which differs from CBO’s method) does not account for the faster growth in the costs of labor and materials in the shipbuilding industry than in the economy as a whole and thus does not reflect the anticipated increase in inflation-adjusted costs of future purchases of ships with today’s capabilities.

The Navy’s shipbuilding plan reports only the costs of new-ship construction.Other activities typically funded from the Navy’s budget accounts for ship construction—such as refueling nuclear-powered aircraft carriers or outfitting new ships with various small pieces of equipment after the ships are built and delivered—would add $1.7 billion to the Navy’s average annual shipbuilding costs under the 2016 plan, by CBO’s estimate. (Between 2010 and 2015, the cost of those other activities averaged $2.1 billion per year.) Including those extra costs would increase the average annual cost of the Navy’s 2016 plan to $20.2 billion per year, CBO estimates.

CBO’s estimate of the $18.4 billion per year for new-ship construction in the Navy’s 2016 shipbuilding plan is 32 percent above the historical average annual funding of $13.9 billion (in 2015 dollars). And CBO’s estimate of $20.2 billion per year for the full cost of the plan is 28 percent higher than the $15.8 billion the Navy has spent, on average, annually over the past 30 years for all items in its shipbuilding accounts. If funding were to continue at the average for the past 30 years, under one possible approach to ship construction, the Navy would be able to build about 70 fewer battle force ships than it currently plans, CBO estimates.