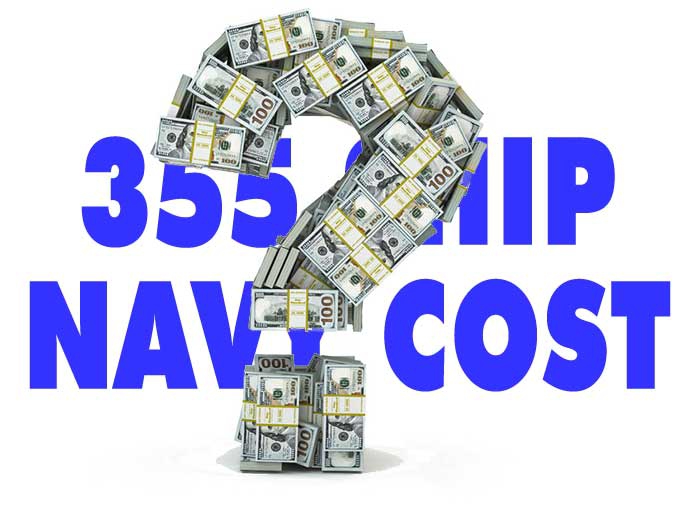 APRIL 24, 2017 — A new report from the Congressional Budget Office estimates that, over the next 30 years, meeting the 355-ship objective called for in the new Navy force structure assessment (FSA) released in December 2016 would cost an average of about $26.6 billion (in 2017 dollars) annually for ship construction — more than 60 percent above the average amount the Congress has appropriated for that purpose over the past 30 years and 40 percent more than the amount appropriated for 2016.

The CBO has estimated the costs of achieving the 355 ships objective within 15, 20, 25, or 30 years. As part of its analysis of those alternatives, the agency assessed the implications of building and operating a 355-ship fleet, including the number of ship purchases that would be necessary, prospective inventory levels, personnel requirements, and effects on the shipbuilding industry.

CBO estimates that the earliest the Navy could achieve its goal of a 355-ship fleet would be in 2035, or in about 18 years, provided that it received sufficient funding. However, the cost to build and operate a 355-ship fleet would average $102 billion per year (in 2017 dollars) through 2047, CBO estimates, or more than one-third greater than the amount appropriated for fiscal year 2016 for today’s 275-ship fleet. On average under CBO’s alternatives, shipbuilding costs would be at their highest point over the next 10 years, while operating costs would be highest between 2037 and 2047, once the fleet numbered 355 ships.

To establish a 355-ship fleet, the Navy would need to purchase around 329 new ships over 30 years, compared with the 254 ships that would be purchased under the Navy’s Navy’s 2017 shipbuilding plan. In particular, over the next five years, the Navy would purchase about 12 ships per year under CBO’s alternatives compared with about 8 per year under the Navy’s 2017 plan.

Over the next 30 years, buying additional fixed-wing aircraft and helicopters to outfit the additional 63 ships would require $15 billion more than the Navy would spend on aircraft under its existing plan. Those costs do not reflect the additional weapons or unmanned systems that the Navy would need to purchase to arm the new ships or the cost of improvements to the shipyards that would be needed to build ships at higher rates.

Implications for the Shipbuilding Industry?

Enlarging the fleet to 355 ships would place a higher demand on the shipbuilding services of those seven (and possibly other) shipyards.

Over the past decade, the Navy has purchased an average of 8.3 ships per year. Under the four alternatives, average annual shipbuilding rates over the next 10 years would increase to 12 to 15 ships per year. To meet that demand, all seven shipyards would need to increase their workforces and several would need to make improvements to their infrastructure in order to build ships at a faster rate.

However, certain sectors face greater obstacles in constructing ships at faster rates than others: Building more submarines to meet the goals of the 2016 force structure assessment would pose the greatest challenge to the shipbuilding industry. Increasing the number of aircraft carriers and surface combatants would pose a small to moderate challenge to builders of those vessels.

Finally, building more amphibious ships and combat logistics and support ships would be the least problematic for the shipyards.

The workforces across the shipyards would need to increase by about 40 percent over the next 5 to 10 years. Managing the growth and training of those new workforces while maintaining the current standard of quality and efficiency would represent the most significant industrywide challenge.

In addition, says the CBO report, industry and Navy sources indicate that as much as $4 billion would need to be invested in the physical infrastructure of the shipyards to achieve the higher production rates required under the 15-year and 20-year buildups. Less investment would be needed for the 25-year or 30-year buildups.