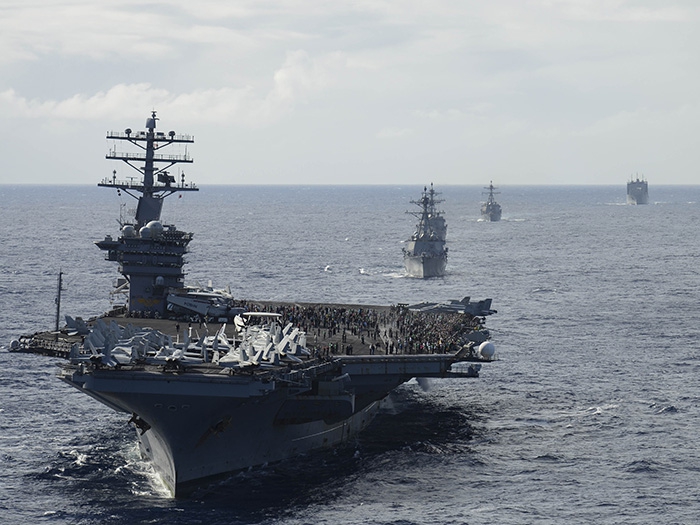 MARCH 15, 2018 — A new report from the Congressional Budget Office estimates that the costs of achieving a 355 ship Navy under two different approaches would average over $100 billion annually through 2047.

Those scenarios are compared with two others that would cost less and involve a smaller fleet.

In December 2016, the Navy released a new force structure assessment (FSA) that called for a fleet of 355 ships—substantially larger than the current force of 280 ships. In response to a request from the Subcommittee on Seapower and Projection Forces of the House Committee on Armed Services, CBO explored the costs of achieving that goal in a previous report. To expand on that analysis, CBO has estimated the costs of achieving a 355-ship fleet under two alternatives. The agency then compared those scenarios with two other alternatives involving smaller fleets. For all four alternatives, CBO explored shipbuilding and operating costs, the composition and capabilities of the fleet, and effects on the shipbuilding industry.

The four alternatives would affect the size and composition of the Navy in the following ways, CBO estimates:

Under the first alternative, the Navy would create a 355-ship fleet by building more ships over the next 20 years, achieving the force goal by 2037. The cost to build, crew, and operate a 355-ship fleet achieved by new construction would average $103 billion (in 2017 dollars) per year through 2047.

Under the second alternative, the Navy would attain a 355-ship fleet sooner, in about 2028, but would not achieve the composition that the service wants until 2037—by using a new-ship construction schedule similar to the schedule under the first alternative, and also by extending the service life of some large surface combatants, amphibious ships, attack submarines, and logistics ships. Its costs would average $104 billion annually through 2047.

Under the third alternative, the Navy would maintain a fleet comparable in size and composition to today’s fleet of 280 ships. It would cost an average of $91 billion annually through 2047.

The fourth alternative would cost the least and illustrates the long-term implications of funding the Navy at roughly the level it has received historically for ship procurement. By 2047, the fleet would fall to 230 ships. In total, that alternative would cost an average of $82 billion per year over the next 30 years.

Implications for the Shipbuilding Industry

CBO anticipates that shipyards would need to make significant investments in facilities and infrastructure to build the larger fleets. For the smaller fleet alternatives, maintaining the Navy at its current size would require little change to the industrial base that builds warships, whereas a fleet based on historical funding would lead to less ship construction business for the shipyards, with the possibility that one or more could leave the industry.