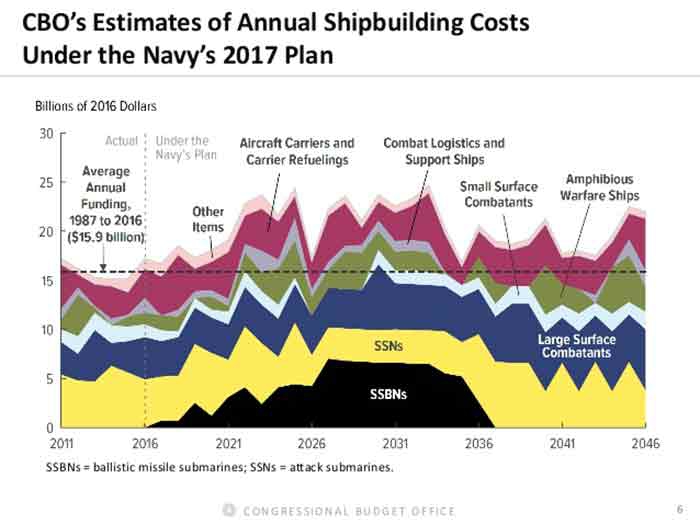 JANUARY 4, 2017 — Shipbuilders and the Navy are hopeful that the incoming Trump administration will make good on a campaign commitment to a 350 ship Navy. However, the non-partisan Congressional Budget Office today pointed out that even getting to the Navy’s current 308 ship goal might be difficult under Budget Control Act restraints that remain in place through 2021.

And, in a summary of its Analysis of the Navy’s Fiscal Year 2017 Shipbuilding Plan, released today in advance of publication of the full report, the CBO puts the average annual cost over the next 30 years of carrying out the Navy’s 2017 shipbuilding plan, covering FY 2017 to FY 2046 and submitted to the Congress in July 2016 at about $21 billion in 2016 dollars — one-third more than the average amount of funding that the Navy has received for shipbuilding in recent decades.

And. although the CBO analysis focuses on the FY 2017, 308 ship plan, noting the new Navy force structure assessment calling for a fleet of 355 ships, CBO says that even the slightly smaller notional fleet of 350 ships that policymakers have called for, could cost $25 billion per year, or 60 percent above the historical average.

CBO says its estimates of the costs of the Navy’s plan are higher than the Navy’s because its estimating methods and assumptions regarding future ships’ design and capabilities differ from those that the Navy uses and because its treatment of growth in the costs of labor and materials for building ships is different from the Navy’s.

The difference widens over time in part because, says CBO, the Navy’s method of developing constant-dollar estimates does not account for the faster growth in the costs of labor and materials in the shipbuilding industry than in the economy as a whole and thus does not reflect the increase in the inflation-adjusted costs of ships with today’s capabilities that would be anticipated if such ships were purchased in the future.

The CBO notes that Navy’s shipbuilding plan reports only the costs of new-ship construction. It excludes other activities typically funded from the Navy’s budget account for ship construction—such as refueling nuclear-powered aircraft carriers or outfitting new ships with various small pieces of equipment after they are built and delivered—that would, by CBO’s estimate, add $1.8 billion to the Navy’s average annual shipbuilding costs under the 2017 plan. (From 2011 to 2016, the cost of those other activities averaged $2.0 billion per year.) CBO estimates that with those extra costs included, the average annual cost of the Navy’s 2017 plan would be $20.7 billion per year— 10 percent greater than the Navy’s estimate with those additional costs added in.

The CBO says that implementing the Navy’s plan could be difficult under current law. The Budget Control Act of 2011 (BCA) placed caps on both defense and nondefense discretionary spending that remain in effect through 2021. (The BCA does not address specific budget accounts such as the one for shipbuilding.)

If, under the BCA’s caps, the Navy received the same portion of DoD’s budget and devoted the same percentage of its budget to ship construction over the 2017–2021 period that it has over the past 15 years, the annual shipbuilding budget would fall 20 percent short of CBO’s estimate of the amount required to execute the Navy’s 2017 plan over that period.