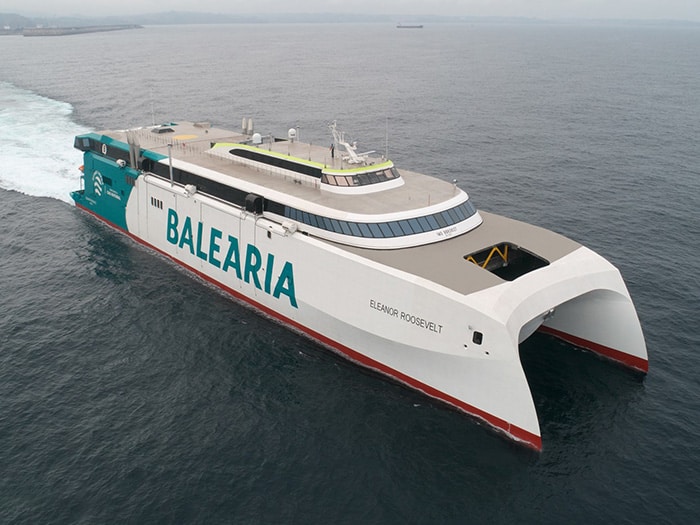 New Baleària ferry will be a not quite identical twin of Eleanor Roosevelt. [Image: Incat Crowther]

Spanish ferry operator Baleària has begun the construction of a second fast passenger and cargo ferry with dual fuel natural gas engines at the Armon shipyard in Gijón, Spain. The RoPax cat will be a near sister to the Incat Crowther 123 design Eleanor Roosevelt, delivered by Armon in 2021, but will incorporate a few changes, noticeably increased power.

The ship will be named Margarita Salas, in honor of pioneering biochemist Margarita Salas, and will be Baleària’s tenth vessel with dual fuel natural gas engines, which it calls “a versatile technology that can also consume 100% biomethane, as well as green hydrogen mixtures of up to 25%, and renewable gases that are neutral in CO2 emissions.”

The Margarita Salas will have the same dimensions as the Eleanor Roosevelt, which is 123 meters long, 28 meters wide and can carry 1,200 passengers and 400 vehicles, but will have modifications that include adding a second passenger deck with a seating area in the bow and doubling the area of ​​the aft terrace with a bar service outside.

Power will be increased by 10% compared to the sister ship, with the installation of four dual fuel Wärtsilä engines delivering 9,600 kW, compared to the 8,800 kW produced by the 16V31DF main engines in the Eleanor Roosevelt. This will allow the new vessel to reach a service speed of 35 knots.

While Baleària says the dual fuel gas engines “renew its commitment to this green energy as a transition fuel,” it notes that, for a year now, it has been forced to reduce the use of LNG “due to the skyrocketing growth in its price.”