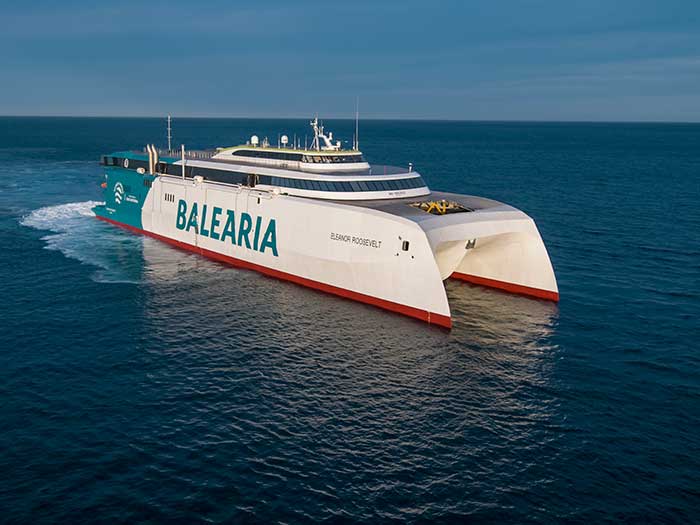 Spanish ferry operator Baleària reports that its Eleanor Roosevelt, the world’s first fast ferry with LNG-fueled engines, will start operating May 1 on its route linking Dénia on Spain’s east coast, with Ibiza and Palma in the Balearic Islands.

“We want to promote the Balearic Islands, a destination we have always been involved with and to whose citizens we are firmly committed, by bringing them our most revolutionary, green and smart ship,” said Adolfo Utor, president of Baleària. “The number of high-speed passenger seats on this route will increase by 60% and the number of hold places will be double the current capacity since the vessel can accommodate 1,200 passengers and 450 vehicles.”

Construction of the Eleanor Roosevelt began at the end of 2018. It is the seventh Baleària vessel to run on natural gas. It is estimated that annually the reduced carbon dioxide emissions from the Eleanor Roosevelt will be equivalent to removing more than 8,900 conventional passenger cars from the roads or planting nearly 27,000 trees. The actual fuel consumption and engine efficiency will be monitored by on-board measuring equipment and sensors as part of a project co-financed by the European Commission.

Built by Astilleros Armon at its Gijon, Spain, shipyard, the Eleanor Roosevelt is an Incat Crowther 125 design RoPax catamaran that couples the designer’s proven hull form with an operation-specific center bow design. A retractable center T-foil is used to smooth the ride, whilst an isolated superstructure reduces the transmission of noise and vibration to the passenger spaces.

The vessel is powered by a quartet of Wärtsilä 16V31DF main engines. Each of these engines produces 8,800kW and drives a Wärtsilä LJX 1500 waterjet.