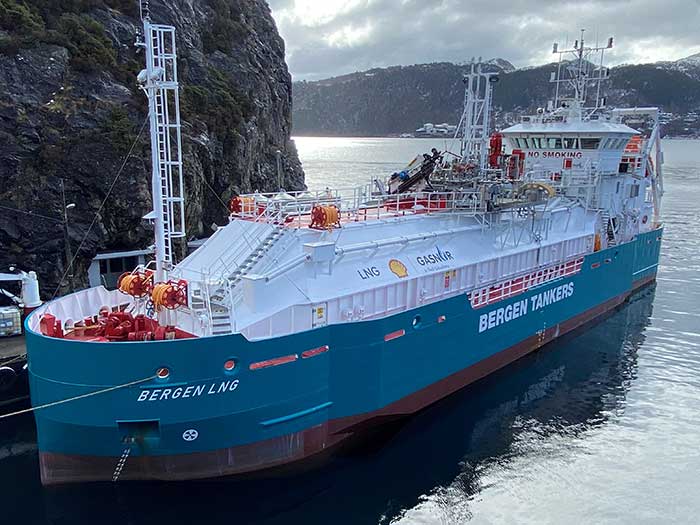 The vessel was created by converting the 2010-built oil tanker Oslo Tank to carry LNG instead of conventional liquid marine fuels. Bergen LNG is operated by Gasnor (recently acquired from Shell by Spain’s Molgas Energy) in the Bergen area and on the Norwegian west coast to supply the LNG fueled passenger ships operated by Hurtigruten and Kystruten.

The conversion took place at Westcon Shipyards in Florø.

BV supported the owners and designer from the beginning of the project to ensure that the conversion could be performed in compliance with the requirements of the International Gas Carrier Code (IGC Code), notably with regard to stability and navigational safety. BV has also played an important role in the involvement of the flag state. In order to support an efficient conversion process, BV’s Nordic plan approval team fast-tracked the design review process of time critical parts and ensured quick communication of findings.

Gijsbert de Jong, Marine CEO for Bureau Veritas’ Nordic region, said: “Over the past years, we have gained a lot of experience with conversion projects in the Nordic region. Our local plan approval capabilities and experienced surveyor team are a significant asset to our clients. In this respect, the Bergen LNG project stands out in terms of technical complexity and customer service.”

Ingemar Tønder Presthus, Technical & Marine Manager for Bergen Tankers, commented: “BV has been an important partner throughout this extensive and demanding project—first in the design phase to identify the regulatory framework, and later with the follow-up at the shipyard. The BV team in Norway has been a strong support for us during the project execution as they could mobilize people at short notice and showed flexibility when plans needed to be changed. Their expertise has been an important factor in the success of the project.”