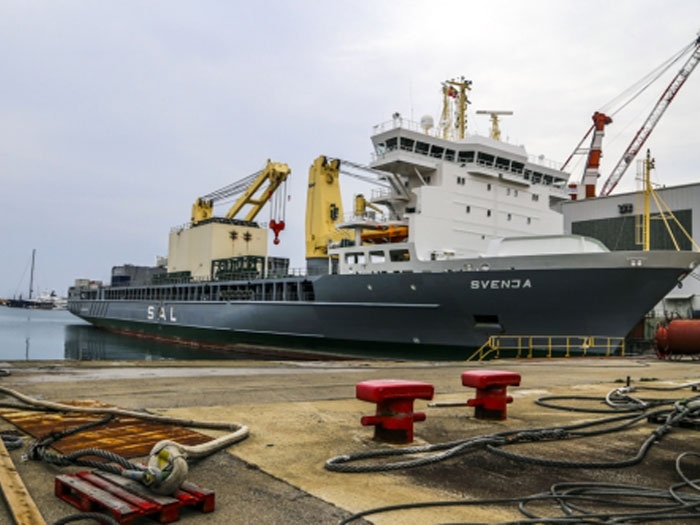 Sponson being loaded for shipment to Costa Concordia wreck site off the island of Giglio, Italy

APRIL 26, 2014—The first of the 19 sponsons that will be installed on the Costa Concordia in preparation for the refloating of the submerged cruise ship arrived this morning in Giglio Island, Italy.

The 810-ton, 33.5-meter wide, 11.5-meter high sponson will be one of 14 new sponsons positioned on the
starboard side. Another four will be installed on the ship’s port side. The sponson has electrical-pneumatic systems and strand jacks that reach a height of more than 20 meters and depth of 10.5 meters. It will be positioned as soon as the operation will be authorized. These new sponsons are will be the last of a total of 30 needed to refloat the wreck.

Plans by the Titan Micoperi, made up of U.S. salvage company Titan Salvage and Italian marine contractor Micoperi, call for removal of the ship wreck in one piece. The plan was chosen by specialist representatives from Costa Crociere, Carnival Corporation & plc, London Offshore Consultants and Standard P&I Club, with the collaboration of RINA and Fincantieri.

At this point the hull is resting on the false bottom at a depth of about 30 m. A pneumatic system will be used to empty the water gradually from the caissons on both sides of the wreck, giving the sufficient buoyancy to push it upwards. On completion of the emptying process, a section of about 18 m will remain submerged.

Earlier in the week, the Conquest MB1, a new sophisticated crane barge, arrived at Giglio Island to begin operations related to the installing the 19 sponsons. The Conquest MB1 is fitted with a sophisticated rotating/luffing crane and associated automated heel/trim compensation system.

The barge is designed with a six point mooring system and accommodation modules for 60 persons, as well as systems to support diving operations. Divers will operate from the barge during the installation of the sponsons.

Sponsons will be installed and connected underwater with chains and cables, with a complex and weather sensitive operation. Once the first two sponsons will be positioned, technicians will be able to verify precisely the overall timetable that currently indicates a possible refloating by the end of June