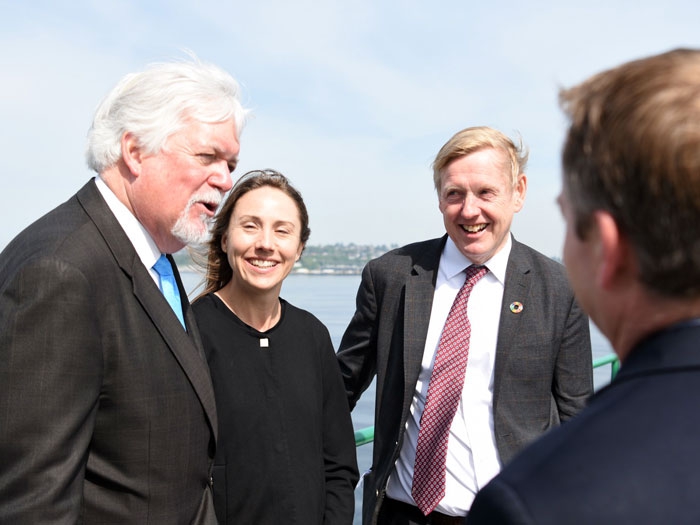 MAY 16, 2018 — As one of the largest ferry operators in the world, Washington State Ferries (WSF) has a high profile with the public and in the marine industry. So when WSF does something, people stand up and take notice. As we reported last month, Washington Governor Jay Inslee signed a transportation measure that contained funding of $600,000 to develop a Request for Proposal (RFP) to convert its three WSF Jumbo Mark II Class vessels to hybrid electric propulsion.

Earlier this year, two studies were completed by Seattle-based naval architects and marine engineers for WSF regarding the conversion of Jumbo Mark II Class ferries and the related dockside infrastructure.

The Hybrid System Integration Study performed by Elliott Bay Design Group (EBDG) examined the feasibility, technology, and costs involved in converting the three ferries, the M/V Wenatchee, M/V Tacoma, and M/V Puyallup, to hybrid electric propulsion. The study estimated the cost to convert the three 460 ft x 90 ft ferries. The real benefits of the project would be substantial fuel savings and to the environment, significantly slashing particular matter, NOx and SOx emissions. Concludes the study: “WSF produces 67% of WSDOT’s total emissions and the three Jumbo Mark II vessels emit 26% of WSF’s share of carbon emissions. Given the late 1990’s emissions standards that the Jumbo Mark II diesel engines were required to meet, the emissions savings is likely even greater in regard to NOx, SOx, and diesel particulate matter. This project would have enormous impact in meeting the 2020 emissions targets.”

In 2009, state agencies were directed by the legislature to reduce greenhouse gas emissions and report these reductions to the Department of Ecology. This requirement is part of the State Agency Climate Leadership Act that sets a goal for agencies to reduce their emissions:

Each agency is required to come up with strategies to meet their reduction goals.

Upgrades at the docks and the utilities in Seattle, Bainbridge, Edmonds, and Kingston, where the boats operate, would be no small cost either. The WSF Medium Voltage Shore Power Feasibility Study by Glosten examines the charging infrastructure needed to recharge the ferries dockside, as well as costs to the utility for power, and battery replacement. Glosten estimated it would cost $6.91 million to upgrade each terminal.

Welcoming a delegation from Norway
Converting the three WSF Jumbo Mark II Class vessels to electric propulsion will put the fleet on the cutting edge of maritime clean technology—not only in the U.S., but globally, points out classification society DNV GL.

Earlier this month, Washington State officials welcomed a delegation from Norway to share and learn from the acknowledged global leaders in the maritime clean-tech sector. Key participants in the collaboration event included the Washington State Departments of Transportation (WSDOT) and WSF, Commerce, Port of Seattle, NCE Maritime Clean Tech Cluster, the Norwegian Maritime Authority, Norwegian Embassy, and industry leaders, including DNV GL and the Confederation of Norwegian Enterprises..

Among the Washington State officials meeting with the Norwegian delegation was Roger Millar, Secretary of Transportation, WSDOT.

The engine conversion is expected to take place during normal maintenance time, avoiding disruption of passenger services, WSDOT officials said. The project is also expected to save up to $14 million in ferry operating costs.

“We’re anticipating that that hybrid conversion is going to pay for itself in the fuel saved,” Millar said. “It’s going to reduce our greenhouse gas emissions by about a third, and it paves the way to converting the rest of our fleet to either a hybrid technology or an all-electric technology.”

At right, one of four diesel engines on the M/V Tacoma. Two of the ferry’s four engines will be replaced in order to convert it into a hybrid-electric vessel

As the initiator of the Green Coastal Shipping Program — the Norwegian public-private partnership founded in 2015 — DNV GL shared lessons learned on the success factors for early markets to establish an effective green shift, as well as “cluster” models for collaboration. The company also provided insights from its role as the Technical Advisor to the NOx Fund, a model public-private policy mechanism that has funded many of the emission reducing innovations.

The Washington Maritime Blue initiative builds upon a similar vision and framework as the Norwegian models. Led by the Washington State Department of Commerce, the initiative aims to make Washington State home to the nation’s most sustainable maritime industry by 2050 and bring together industry, workforce, government, labor, technology, research, financial and education sectors into a unified, sustainable “maritime cluster.” When the initiative was launched earlier this year, DNV GL was engaged by Commerce to facilitate and provide expertise to the project.

“We are looking forward to building a collaborative partnership between the Norwegian Maritime Clean Tech and our growing Washington Maritime Blue clusters,” said Joshua Berger, the Governor’s Sector Lead and Director of Economic Development for Maritime. “As we develop into a center of excellence for maritime innovation these types of relationships are critical for knowledge and tech transfer for growth,” said Berger. Based on their successful track record,” he added, “DNV GL can clearly support us and our stakeholders as we move forward in a coordinated and visible process.”

The conversion of the three Jumbo Mark II Class ferries will lead the way for electrification of the entire fleet. The electrification program, an accelerated demonstration project of Washington Maritime Blue, will significantly cut emissions, improve reliability, save money and virtually eliminate the engine noise that can disturb marine wildlife such as orcas.

During the visit, the delegation, including Norwegian Ambassador to the U.S. Kåre Aas, toured the ferry Tacoma and discussed the plans under Gov. Jay Inslee’s new Washington Maritime Blue initiative to bring the fleet into the era of sustainable, low-carbon and low-cost operations.

With extensive experience in maritime battery technology and shore side charging, DNV GL shared its recommendations for a holistic approach to establish onshore “microgrid” charging stations with battery storage systems for optimized infrastructure for ferry electrification. Along with other leading Norway delegate companies and organizations, the insights shared will help to establish Washington State’s leadership role in U.S. maritime and energy sustainability.

“Bringing the Norwegian delegation to Washington marks a significant step forward for Washington Maritime Blue and its transition to a cluster organization,” said Freddy Friberg, Regional Manager for DNV GL – Maritime Americas. “These collaborations bring invaluable insights on how maritime clusters can drive the innovation necessary for success.”