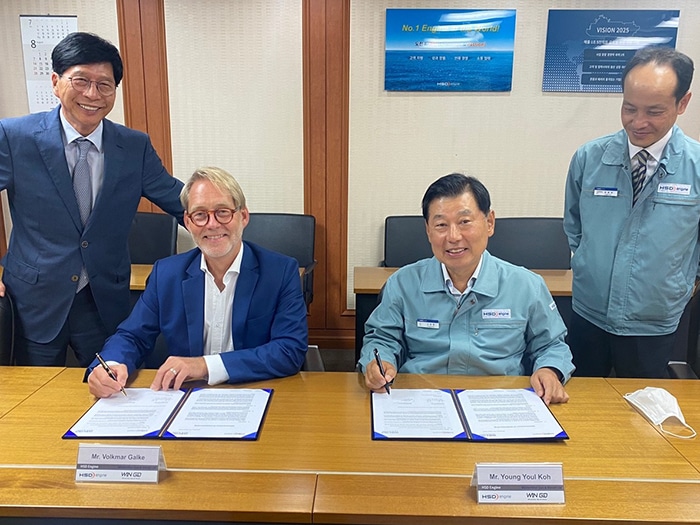 Winterthur, Switzerland, headquartered WinGD and Korean engine builder HSD Engine have initiated a Joint Development Project (JDP) to advance the development of WinGD’s large-bore methanol-fueled two-stroke engines. The aim is to deliver an engine capable of running on carbon-neutral green methanol by 2024, providing shipowners with a power solution enabling them to meet IMO’s 2050 target – and to reach net-zero emissions – with their next generation of vessels.

“With new fuels, new materials are needed and manufacturers’ involvement in design is critical to ensure that engines can be produced at reasonable costs and in a reasonable timeframe, said Dominik Schneiter, VP R&D, WinGD. “HSD is well-known as a high-class engine builder that will be able to support WinGD in delivering the methanol-fueled two-stroke engines that our customers will be seeking for their vessels in the near future.”

Jong-Tae Choi, VP, engineering & technology, HSD Engine said: “Collaborating with WinGD on this project will place HSD Engine in prime position to serve its shipyard and shipowner customers with the clean fuel solutions they need to reach approaching emissions regulations.”

The JDP will focus on some of the largest engines in the WinGD portfolio, the X92 and X82. These engines will be suitable for the larger and ultra-large containerships in which WinGD sees rapidly growing interest in green methanol. Demand is also growing, albeit at a slower pace, in the bulk carrier and tanker segments.

The market for green methanol, which is produced using renewable electricity and renewable carbon sources, is growing rapidly and shipowners are increasingly confident that availability will be scaled up in line with the growth of the methanol-fueled fleet. WinGD’s first methanol-fueled two stroke engines will give ship operators further confidence that the technologies to use clean fuels will be available when they are needed.

The project is WinGD’s latest partnership with engine builders aimed at accelerating the development of WinGD engines capable of running on new fuels. In June, it announced that it would collaborate with Hyundai Heavy Industries’ Engine Machinery Division to deliver the first WinGD engine capable of running on ammonia. The two parties will aim to deliver a first engine by 2025, in line with WinGD’s previously announced timeframe for bringing ammonia-fueled engines to market.

According to Schneiter, multiple collaborations are essential to meet expectations in all shipbuilding markets and to jointly develop engine builders’ capabilities in testing and designing for new fuels.