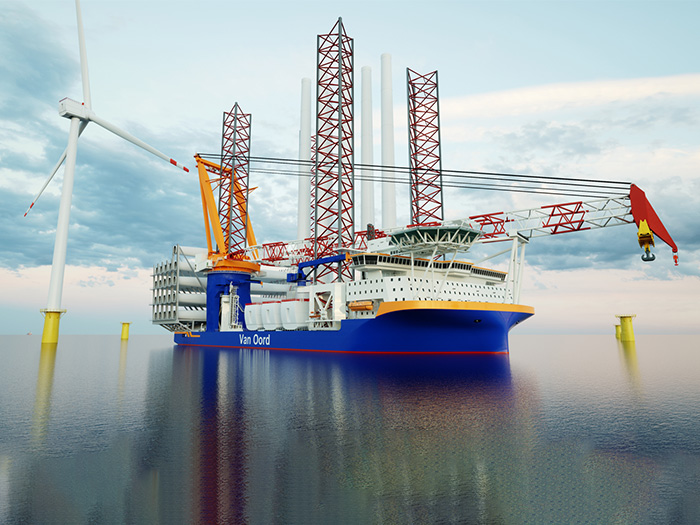 Wärtsilä will also supply a package of leading-edge thrusters to the Van Oord vessel for efficient station keeping.

Wärtsilä is hailing the engine order, which includes the fuel supply system, as a “methanol milestone,” adding a newbuilding order to the company’s methanol-fueling credentials which include the conversion of the first of four engines on Stena Germanica to use the fuel in 2015.

“We see methanol as one of the alternatives to meet the industry’s goals to reduce its environmental impact,” said Harold Linssen, project director, Van Oord. “We are pleased to be the pioneer of Wärtsilä’s latest methanol-fueled engine technology.”

Wärtsilä says that “green” methanol is among the potential and most promising future fuel candidates. It is made using hydrogen from renewable-sourced electricity and recaptured carbon. The benefits of methanol are that it is relatively inexpensive to produce, is widely available, and easy to store. Furthermore, the global supply infrastructure is already established.

In line with its strategy to meet future development needs through collaboration with key stakeholders, Wärtsilä recently signed a long-term strategic cooperation agreement with Yantai CIMC Raffles. The cooperation is aimed at the design and development of future-proof solutions for newbuild vessels. This will include the use of future carbon-free fuels and other integrated technology solutions.

Following the agreement, Yantai CIMC Raffles awarded Wärtsilä the honorary title of “Excellent Partner” in recognition of its long-term support and cooperation.

“Leveraging the combined strengths of Yantai CIMC Raffles and Wärtsilä will ensure that we can deliver the best solutions to support our customers on their path to lower emissions,” said Li Minggao,vice president, CIMC Raffles.

“Enabling the use of methanol fuel is an important step along the path towards decarbonized operations. These cooperations will speed the work in bringing these fuels to the market, and in building ships that meet and exceed the regulatory and operational requirements for the coming decades,” said Roger Holm, president, Wärtsilä Marine Power.

During the coming few years, Wärtsilä says, it will commercialize engine technologies that allow the use of all alternative fuels currently under discussion. Given the modularity of modern engines, this means that owners can already today future-proof their existing assets and plan for the use of new fuels as and when they become available.