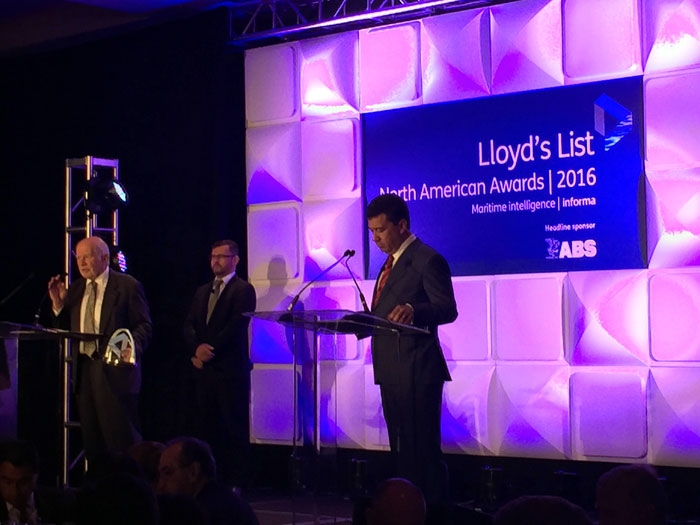 MAY 27, 2016—Leading P&I organization The American Club has won the Lloyd’s List North American Maritime Services Award for 2016. The presentation of the award took place in New York at the end of last week in the presence of a large congregation of luminaries from the North American maritime community, and the Chairman of the Board of the American Club, Arnold Witte, accepted the award on its behalf.

In a news release, Lloyd’s List said: “The Maritime Services Award – General is bestowed on an organization, company or individual for an exceptional achievement or contribution to any service sector of the North American maritime industry and the judges were exceedingly impressed with the American P&I Club’s recent growth.”

Joe Hughes, Chairman and CEO of the American Club’s managers, Shipowners Claims Bureau, Inc., said: “An important criterion explicitly identified by Lloyd’s List was the winner of this award should have gone ‘above and beyond best practice to offer the shipping industry something exceptional’ and we are absolutely delighted that the judges were satisfied we have achieved this.

Hughes, shown at right, added: “The essence of our original entry is contained in the commendation of the Club (as below) which was taken into account by the judging panel in choosing the American Club for this award from a very strong field of finalists.”

This distinction was bestowed on the Club by a 14 strong judging panel representing many sectors of the shipping industry. It speaks to the high regard in which the American Club is held by the maritime community and represents a fitting tribute to all its Members on the eve of its centennial year.

Established in 1917 as the American Steamship Owners Mutual Protection and Indemnity Association, Inc., The American Club for much of its history insured only U.S.-based shipowners. But in the mid-1990s the club adopted a new strategy of international growth and diversification. Since then, The American Club has undergone a remarkable transformation. Its achievements over the period include: a fivefold increase in entered tonnage; fourfold premium growth; eightfold growth in funds under investment and a tenfold increase in free reserves; a broad and expanding international membership, 47% of its revenue now coming from EMEA, 32% from the Americas and 20% from Asia. Twenty years ago, less than 10% of its income came from non-U.S. sources.

Besides its headquarters in downtown New York, The American Club also has offices in London, Athens, Hong Kong and Shanghai, and a newly opened office in Houston. The American Club is also a full member of the International Group of P&I Clubs.

Protection and Indemnity insurance (commonly referred to as “P&I”) provides cover to shipowners and charterers against third-party liabilities encountered in their commercial operations; typical exposures include damage to cargo, pollution, death/injury or illness of passengers or crew or damage to docks and other installations.

Running in parallel with a ship’s hull and machinery cover, traditional P&I cover distinguishes itself from usual forms of marine insurance by being based on the not-for-profit principle of mutuality where Members of the Club are both the insurers and the assureds.