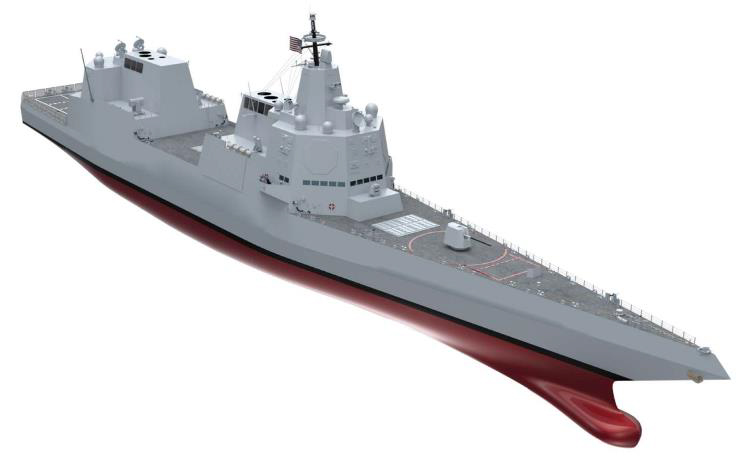 The Navy says the specific contract award amounts are considered source-selection sensitive information and will not be made public at this time.

The work is expected to be completed by July 2023. If all options under the contracts are exercised, work will continue through July 2028 for each respective contract.

The CRS report, which includes a Navy rendering of a notional DDG(X) design concept, says that the Navy approved the DDG(X)’s top- level requirements (i.e., its major required features) in December 2020. Navy officials envision the DDG(X) as being larger than the 9,700-ton Flight III DDG-51 design, but smaller than the 15,700-ton DDG-1000 design. A DDG(X) design midway in displacement between the DDG-51 and DDG-1000 designs would displace about 12,700 tons, but the DDG(X)’s displacement could turn out to be less than or more than that figure, says the report.

All large surface combatants procured for the Navy since FY1985 have been built at either Bath Iron Works or Ingalls. The U.S. Naval Institute’s USNI News is reporting that both the Senate and the Navy are pushing for the DDG(X) to built in a teaming arrangement of the two yards, similar to that between General Dynamics Electric Boat and Huntington Ingalls Newport News Shipbuilding for the Columbia ballistic missile submarine program.

“Bath Iron Works is eager to bring our cutting edge engineering and design expertise, now applied to the DDG 51 program, to the next generation of large surface combatants,” said Bath Iron Works president Chuck Krugh. “The opportunity to work alongside HII and our industry partners to meet the Navy’s needs for capability, schedule and cost will result in synergies that build on other extremely successful Navy construction programs.”

BIW says that the development of DDG(X) will draw on lessons learned from the DDG 51 program as well as the Virginia-class and Columbia-class submarine programs, which have shown that industry involvement and collaboration from the start of the program is a key enabler to program success. BIW and HII were integrated into the DDG(X) team in March 2021 to support concept refinement and decision-making early in the process.

“We are excited to continue on this path with our Navy and industry partners,” Ingalls Shipbuilding president Kari Wilkinson said. “It provides us a tremendous opportunity to bring best practices and innovation from our experienced engineering team to the design of this important future surface combatant.”