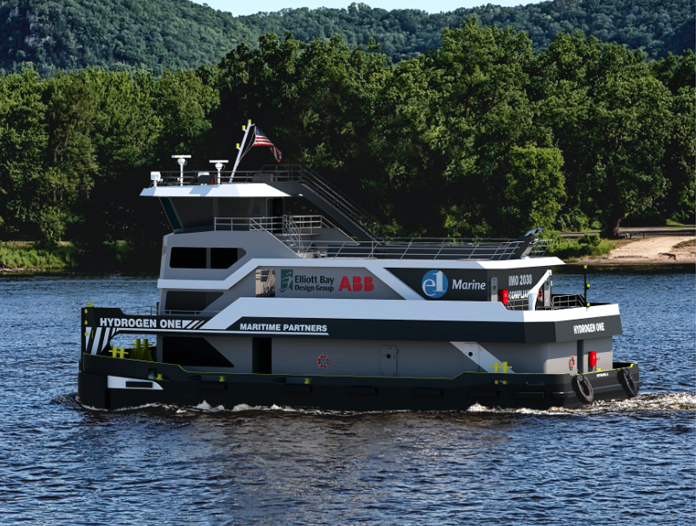 The M/V Hydrogen One, the world's first methanol-fueled towboat, is set to debut in 2023. (Credit: Elliott Bay Design Group)

Regulatory, financial, and consumer pressure is mounting for supply chains to reduce their emissions. Robert Schluter, managing director of e1 Marine, says “it’s time to put hydrogen to work,” and he’s got a plan to make it happen.

The fuel use and associated emissions from maritime port sources can be significant and pose serious health risks to those who live nearby.  Efforts have been underway to reduce these emissions, but ocean-going vessels and harbor crafts are still major contributors to air pollution and greenhouse gas emissions in and around ports. Even though the Environmental Protection Agency (EPA) has adopted emission standards for diesel engines, it estimates that 40% of the nation’s major ports are in or near areas that have violated National Ambient Air Quality Standards.

Additionally, approximately, one-third to one-half of the emissions come from vessels’ auxiliary diesel engines which are run while the vessel is at berth (docked) and require electrical power for all services from lighting to loading or discharging equipment.

Many ports are publicly stating ambitions for net zero operation, but they face financial challenges. Long-term under-investment in port infrastructure has been recognized as a problem at the highest levels, most recently due to the current supply chain crisis. At the same time, investors and financial institutions are placing increasing weight on sustainability in their decision-making processes.

The reality is that not enough ports are achieving the desired benchmarks.

Efforts to reduce vessel port emissions involves requiring ships to shut off diesel engines while at berth to reduce the significant emissions produced by a ships diesel engines. Power for hotel and other ship loads is supplied from shore bower (electric grids) or could be provided by barges or shore-side systems of clean power generation when power is not available at the pier. This is the practice of “cold-ironing” where a vessel at berth connects to a source of electricity on the shore to meet a ship’s cargo handling and hotel needs.

However, grid power can be unavailable at the quantities required at the pier, the cost of bringing grid power to the pier is cost prohibitive, and grid power could be upset due to regional blackouts from volatile weather conditions.

Faced with these hurdles, and growing social, regulatory, and financial demands for greater sustainability, ports are looking to meet their dynamic energy demands in adaptive, flexible, and scalable ways.

e1 Marine is developing a modularized containerized 400 kW methanol / fuel cell power solution that can provide zero-emission MW scale power in a flexible mobile container for cold ironing at the pier, on a barge, or lifted onto the vessel itself. Fuel cells operating on hydrogen produced from e1 Marine’s methanol to hydrogen generators are a quiet, efficient, environmentally friendly, low or zero-emission power source that can readily support port cold ironing applications.

The hydrogen generator uses catalytic steam reforming to produce hydrogen from methanol and water. One-third of the hydrogen produced is attributable to the addition of water which can be recycled from the PEM fuel cell exhaust. The system produces zero particulates, zero NOx, zero SOx, and less CO2 than a diesel generator. And, if you use renewable methanol, the system produces near zero greenhouse gas emissions.

Fuel cells have many advantages over diesel engines, including superior fuel efficiency and low maintenance and repair costs. Power output from the fuel cell system can range from 50kW to 2MW, with larger sizes also possible.

Methanol is a practical feedstock for the system. It is cheap to produce, available in 88 of the world’s top 100 ports, and has the potential to be 100% renewable. The e1 Marine solution consumes 35% less energy than diesel-generators and is thus cost-effective operationally even before considering any new regulations or carbon tax. It can operate on renewable methanol as it becomes available, and when combined with carbon capture (currently under development), it will be a carbon-negative solution.

There is a growing need for ports’ dynamic energy demands to be met in an adaptive, flexible, and expandable manner. Pressure for greater sustainability is growing, but for ports to meet this demand, shore power not only requires an on-shore power connection, but also ships that are able to connect to this power source.

The demand is here, and methanol can meet it. With more than 98 million metric tons of methanol produced every year, 80% of which is already transported by ships. Production is scalable to meet future demands, and methanol is available in or near all of the biggest global ports. It’s a no-brainer.

A unique methanol-fueled towboat design, the M/V Hydrogen One, of which e1 Marine is involved with, will be discussed at Marine Log’s upcoming TTB 2022 event March 29-30 in Mobile, Ala. Project partners Elliott Bay Design Group’s Michael Complita and RIX Industries’ Gregg Baldassarre will present on this topic.