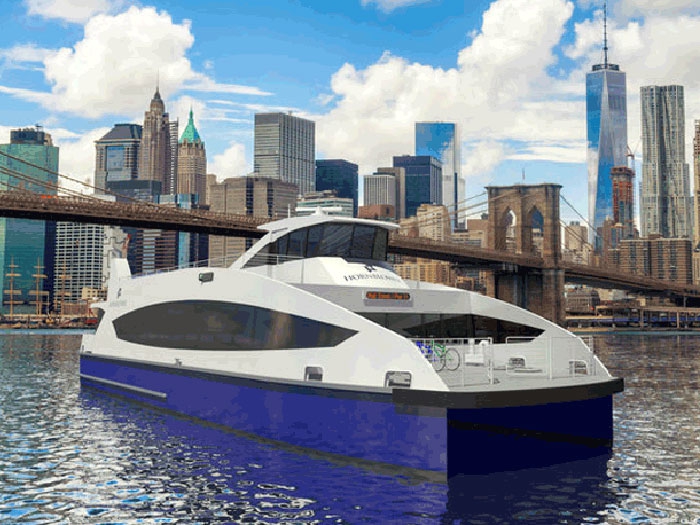 In an exclusive interview with Marine Log, Cameron Clark, VP and GM, Hornblower NY, said Horizon Shipbuilding, Inc., Bayou La Batre, AL, and Metal Shark Aluminum Boats, Jeanerette, LA, would build and deliver 14 ferries by the first quarter of 2017, and the remaining five ferries by 2018. The service, which will be operated by Hornblower under a contract with the city, will launch in the summer of 2017.

All eyes are on this new fleet, as they make history becoming the first ferry fleet to operate citywide. The service is expected to help alleviate some of the congestion on New York City’s already overcrowded and aging MTA subway system, and help bring service to growing waterfront and underserved communities.

The 19 catamaran ferries will all be based on an Incat Crowther design. At 26 meters long they will be slightly larger than the standard 22 m cat ferries. The ferries will carry at least 149 passengers to 21 landings across four of the city’s five boroughs. Each vessel will use EPA-compliant Tier 3 engines to help reduce diesel emissions and noise. The innovative hull design is also expected to limit wake and maximize fuel efficiency.

The goal is to deliver a “21st century ferry product to New York Harbor that will make working, living and playing along the waterfront that much easier,” said Clark. The ferries will be fitted with such amenities as charging stations, WiFi and bicycle racks.

While the short build time will be challenging, Horizon Shipbuilding and Metal Shark are more than capable of getting the job done. Both yards are geared for series construction, and have a proven track record, having completed large vessel orders under aggressive timelines in the past.

Horizon, which specializes in the design and construction of ships, boats, and barges up to 300 ft in length and 1,500 tons launch weight, delivered 40 vessels in a 20-month timeframe—the boats are of the same tonnage as the Citywide Ferry vessels. Horizon is also currently building two 100 ft x 40 ft escort tugs for McAllister Towing, New York, NY. The tugs are to be delivered in early 2017.

Meanwhile, Metal Shark, which has grown substantially over the last decade, and was recently one of nine shipyards awarded MARAD’s Small Shipyard Grants, has a history of building large series newbuilds for government fleets.

Its small shipyard grant of $582,410 will be used to acquire and implement portable work shelters and marine transporters at its Franklin, LA, facility. The acquisition of the Franklin facility in 2014—where it’s believed the Citywide Ferry vessels will be built—enabled Metal Shark to expand its portfolio and construct both aluminum and steel vessels up to 250 ft long.