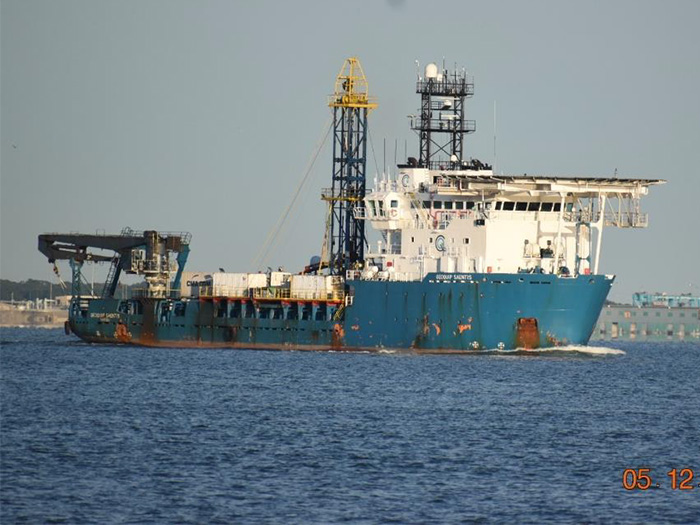 The Geoquip Saentis transits through Norfolk, Virginia on May 12, 2021 [Image: OMSA]

The Offshore Marine Service Association (OMSA) has released its second report made to U.S. authorities under its Jones Act Enforcer program. Sent to Rear Admiral John W. Mauger. Assistant Commandant for Prevention Policy, at the U.S. Coast Guard and Officer Michael Hebert at the Jones Act Division of Enforcement, U.S. Customs and Border Protection, the report asserts that the Geoquip Saentis, a Chinese-built, foreign-crewed, and Bahamian-flagged vessel, transported cargo off Virginia in support of an offshore wind project, and in violation of the Jones Act.

According to OMSA, Geoquip Saentis was built in 2005 in China as a vessel, designed and classed to carry supplies for offshore oil and gas projects. In 2019, the Swiss firm, Geoquip Marine, purchased the then-mothballed vessel and made quick modifications to allow engagement in geotechnical surveys. this work consists of drilling hundreds of holes in the seabed where offshore wind farms will be located and transporting samples from these holes to shoreside labs for analysis.

In its report, OMSA asserts, among other things that:

One of the points to emerge from the detailed 34-page OMSA complaint deserves reading in full, but among the interesting points to emerge is whether the subsea samples collected by the Geodis Saentis are, in fact, “merchandise” in the context of the Jones Act.

Here’s what the OMSA report says:

“There is no question that soil samples are ‘merchandise’ whose transportation between U.S. points is subject to the Jones Act. The definition of ‘merchandise’ is exceptionally broad; it encompasses all ‘goods, wares, and chattels of every description … ‘ 19 U.S.C. § 1401, including ‘valueless material’ and government property, 46 U.S.C. § 55102(a)(2)”

OMSA says that “the swiftness with which the Geoquip Saentis was retrofitted confirms that similar retrofits could have been made to any of the hundreds of U.S.-flagged vessels that are of similar size, technical sophistication, and age to the Geoquip Saentis. In fact, the market research firm Vessels Value recently reported that there are 355 U.S.-flagged offshore supply vessels currently laid up.”

Geoquip Marine says that, having sought expert advice, it responds to the OMSA statement as follows:

Geoquip Marine is the world’s largest wholly dedicated operator of specialist offshore geotechnical data acquisition, analysis and reporting assets. The company operates globally and in recent history has completed works for many of the world’s leading specialist offshore energy developers in the U.S,, Europe, Africa and Asia. In the U.S, this includes various well recognised individual projects working with the leading developers offshore in Virginia, New Jersey, New York and Massachusetts.

Geoquip Marine has been invited to participate in a competitive tender for each of these contracts by the leading U.S. developers and has then been appointed by those companies.

As the world’s leading specialist operator focusing on this vital niche sector in a critical rapidly growing market for global energy supply, Geoquip Marine is proud that it utilizes world-leading technology, employed on research vessels of the highest specification of their type.

The company uses the most highly qualified and experienced crews available, regardless of where they originate from, to supply accurate geotechnical data for its customers. These are the primary factors in the awarding of the contracts in the competitive tenders. No other organization can match Geoquip Marine’s level of wholly dedicated resources, retained knowledge, customer focus, and international experience in this highly specialized process. The critical factors are the accuracy of the data, the technical knowledge and the safe implementation of the research process.

All Geoquip Marine research vessels meet the highest international standards of operations and all Geoquip Marine crew are highly trained and have all the necessary permissions to work, regardless of where they are in the world.

It is wrong to insinuate that Geoquip Marine crew are hired at rates below industry standards. Geoquip Marine prioritizes the crew welfare in its quest for accuracy and those crew are very well treated, very well rewarded and are given continual training to guarantee that they are able to operate to the highest standards of safety and efficiency. As a result, Geoquip Marine is renowned internationally for being an excellent employer and this is a vital factor in securing the services of the very best crew members.

Geoquip Marine is proud to be able to boast that as a result of its exhaustive working practices it has industry-leading safety standards of any operator in its market.

Geoquip Marine vessels do not transport cargo or merchandise. The Geoquip Saentis is an IGSV, it is dedicated to research and has world-leading drilling technology and an onboard laboratory. It collects seabed data, allowing geotechnical parameters to be derived and supporting environmental research.

Geoquip Marine has historically relied upon the longstanding position that research work of the type that it is specifically focused on analyzing the characteristics of the seabed is not covered by the provisions of the Jones Act.

Geoquip Marine is committed to long term operations in the United States. It uses highly qualified U.S. crew whenever possible and actively encourages U.S. crew to apply to work on its vessels. The company recently established a U.S. entity and is committed to investment and growth in the U.S., creating jobs and opportunity for American people, both onshore and offshore.