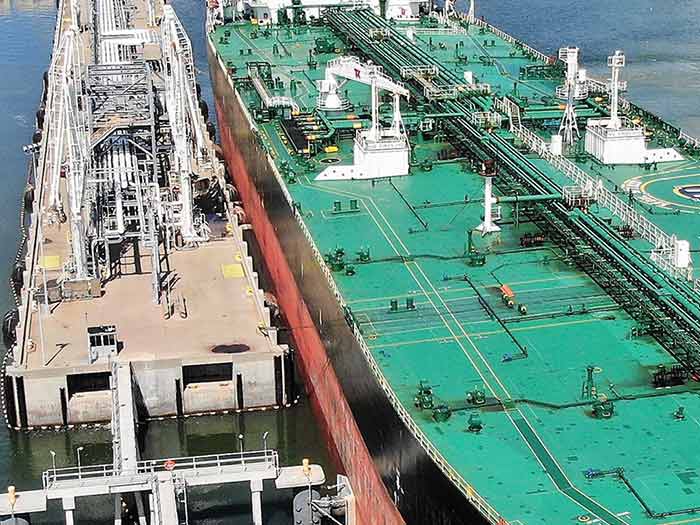 JANUARY 25, 2019 — U.S. exports of crude oil have been soaring, reaching more than 2.3 million a barrels a day by October 2018, according to the most recent Energy Information Industry figures.
That is creating a need for increased VLCC loading facilities.

In response, liquids terminaling and logistics provider Moda Midstream, LLC, has successfully commissioned upgrades to Berth 2A at the Moda Ingleside Energy Center in Ingleside, Texas, to enable loading of very large crude carriers. Moda developed these upgrades to provide existing and potential customers the ability to safely and cost-effectively load VLCCs at rates of up to 80,000 barrels per hour.

“Today we are loading our fourth VLCC at MIEC since late December,” said Moda President and CEO Bo McCall. “With today’s commissioning of our upgrades to Berth 2A, we now have the U.S. Gulf Coast’s most efficient crude export loading rates. The combination of our enhanced loading rates, short transit times to the Gulf of Mexico and minimal port congestion allows us to provide our customers unmatched vessel turnaround times.”

Moda also announced it has commenced a further expansion of its docks, which originally were designed by the U.S. Navy to support a battleship and aircraft carrier group. On completion, MIEC will have combined vessel loading rates of 160,000 barrels per hour and improved berthing efficiencies.

MIEC has worked extensively with the U.S. Coast Guard and the Aransas-Corpus Christi Pilots to ensure efficient transit times and safe berthing of vessels. In addition, the Corpus Christi Ship Channel Improvement Project, when completed, will increase the depth from 47 feet below mean lower low water (MLLW) to 54 feet below MLLW, which will allow for the loading of increased volumes on VLCCs at MIEC.

As part of the expansion program, Moda has started construction of an additional 10 million barrels of crude oil storage. Substantially all of the new storage tanks will be placed in service throughout 2019, and the expansion will be complete by the second quarter of 2020. As part of the expansion, Moda has begun construction of a new manifold and interterminal piping to allow MIEC to receive direct “basin to berth” deliveries from the Cactus II Pipeline, Gray Oak Pipeline and Epic Crude Oil Pipeline. These upgrades will be completed prior to the pipelines’ expected in-service dates. MIEC will be able to receive simultaneous deliveries from these three new “next generation” long-haul crude pipelines at their full mainline rates.

“As the gateway to foreign markets for Permian and Eagle Ford crude production, MIEC has seen very strong customer demand, and we have had tremendous success in securing new customer commitments to support our ongoing expansion,” Mr. McCall said. “Based on current customer interest, we are evaluating additional expansion phases that would increase available storage and waterfront capabilities at our 900-acre site, allowing us to deliver exceptional service and reliability to new and existing customers.”

Already one of the largest crude export terminals in the U.S., MIEC has approximately 2.1 million barrels of oil storage capacity and receives deliveries from the Cactus Oil Pipeline. Moda says MIEC has ample footprint for additional expansion opportunities.