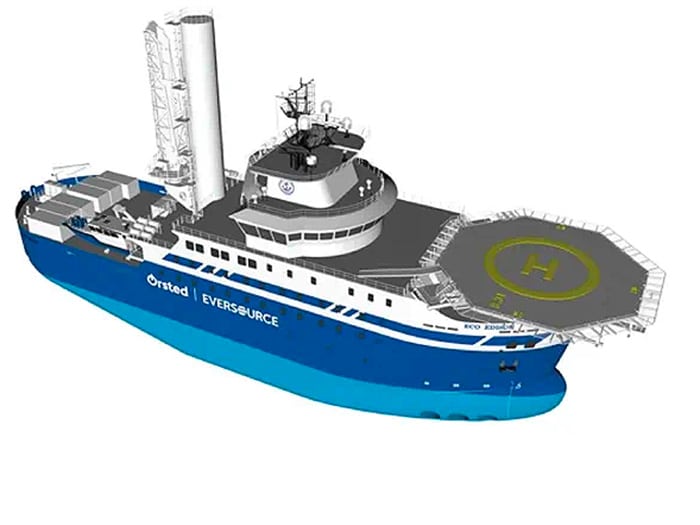 Edison Chouest Offshore (ECO) has started construction of what will be the first Jones Act-qualified offshore wind farm service operations vessel (SOV) to be built in the United States.

The Jones Act SOV, which will be named ECO Edison, is being built at ECO in-house shipyards located in Louisiana, Mississippi and Florida, creating well over 300 new jobs, with components of the vessel being manufactured across 12 states including Alabama, Florida, Illinois, Indiana, Louisiana, Michigan, North Carolina, Ohio, Texas, Washington, West Virginia and Wisconsin.

The vessel, which will be over 260 feet long and capable of housing 60 crew members, will be utilized during the operation & maintenance (O&M) phases of offshore wind farm projects, serving as an at sea base of operations to accommodate and transfer technicians, tools and parts safely to and from the individual wind turbine generators.

“This new vessel will be the first of its kind in the United States and play a crucial role in the growth of America’s offshore wind industry,” said David Hardy, Chief Executive Officer of Ørsted Offshore North America. “We’re proud to work with companies like Edison Chouest Offshore to support good-paying jobs in states across the country as we build a new energy future.”

“Today, the development of a new, clean energy future for the United States takes another important step forward as construction begins on the nation’s first Jones Act-qualified service and operations vessel,” said Joe Nolan, Chief Executive Officer and President of Eversource Energy. “Construction of this vessel will mean hundreds of new jobs for American workers as we continue to bring the benefits of offshore wind to communities around the country.”

With work beginning on the vessel, ECO has also announced the selection of Caterpillar Marine, GE Power Conversion and Voith Schneider as power and propulsion system providers for the ECO Edison. The vessel will be powered by four Caterpillar 3512E EPA Tier 4 generator sets (gensets), each rated for 1700 ekW. The gensets are configured for variable speed operation, allowing for the highest levels of efficiency and minimized exhaust emissions. The GE Power Conversion electrical system can operate with gensets or stored energy.

The vessel will also be equipped with extensive remote monitoring and support capability provided by Louisiana-based, ECO-affiliated Marine Technologies LLC.

This full configuration is designed to result in a Jones Act SOV that delivers high efficiency, low power consumption, minimum GHG emissions, maximum workability and the highest levels of comfort. The vessel is also being constructed to incorporate future zero-carbon emission technology to assist in reaching carbon neutral goals.