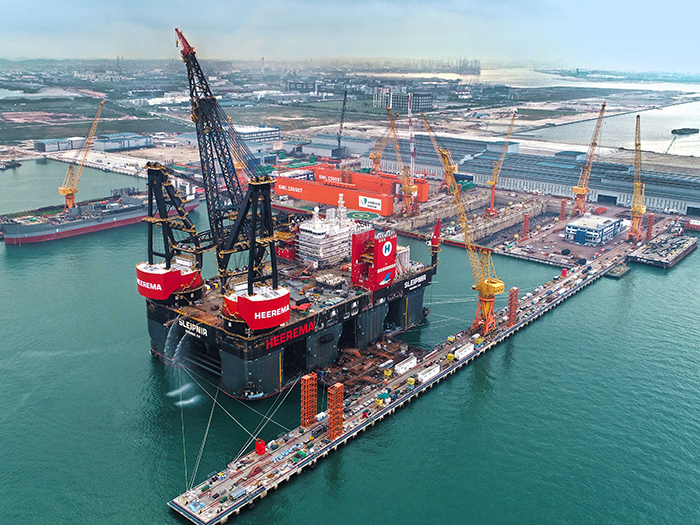 Built for Heerema Marine Contractors, the SSCV Sleipnir’s twin revolving crane’s can lift 20,000 tonnes in tandem – no other existing crane vessel has this capability.

Sleipnir is also the first dual fuel vessel in its category, able to operate on both MGO and LNG and is equipped with a ballast water management system that is both U.S. and IMO type approved.

Named after the Norse God Odin’s eight-legged stallion, SSCV Sleipnir has a 220 m by 102 m reinforced deck area and can accommodate 400 persons.

The giant crane vessel will be deployed globally for installing and removing jackets, topsides, deep-water foundations, moorings and other offshore structures. Its single-lift capability will make it capable of dealing with larger integrated structures than previously possible, minimizing offshore assembly work and raising operational efficiency to a new level, while not compromising the flexibility and robustness of traditional installation methods.

Heerema has already secured contracts to deploy the vessel on offshore energy developments that include:

In the offshore wind sector, with its large cranes capable of a 175-m lift height and a combined 20,000-ton lift capacity, Sleipnir is well placed to accommodate the trend to increasingly larger offshore wind turbines.

““I am immensely proud that Heerema Marine Contractors is again taking things further with the introduction of our new semi-submersible crane vessel,” said Pieter Heerema, Chairman of the Board at Heerema Marine Contractors, speaking at the vessel’s christening. “Sleipnir scores several firsts in the industry: It is the largest crane vessel yet built; it has the strongest pair of revolving cranes; and it’s also the worlds first crane vessel with dual-fuel engines running on MGO and LNG, dramatically reducing harmful emissions. Sleipnir’s innovative capabilities will place Heerema even firmer at the forefront of developments in the offshore oil, gas and wind energy industry for both installations and decommissioning.”