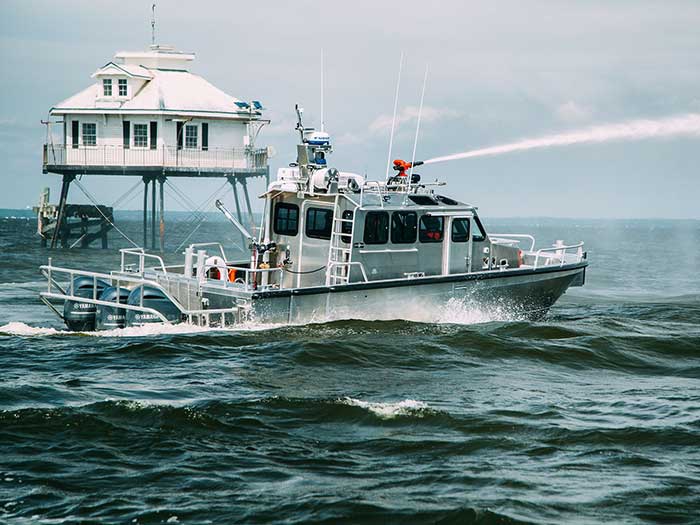 JULY 24, 2017 — A 38 ft multi-mission patrol boat for Montauk Harbor, Montauk, NY, will be officially dedicated with a “splash down” ceremony in Montauk on July 26.

The vessel is the latest addition to the expanding fire boat series built by Theodore, AL, headquartered shipbuilder Silver Ships.

Because it is in operation across multiple agencies, the boat also supports search and rescue missions, law enforcement and firefighting. Its main mission will be focused on law enforcement and patrolling the waters of Montauk, East Hampton and the surrounding areas, but it will be used by the fire department as needed and can even serve in place of the U.S. Coast Guard patrol vessels if the situation arises.

“It is imperative that law enforcement, fire and other agencies work together to keep the public safe, which is our primary intent through the use of our new patrol boat,” said Ed Michels, Chief Harbormaster at East Hampton Town Police Department. “This boat epitomizes interoperability, and is a symbol of multi-agency cooperation. We are extremely pleased with how well this vessel operates specifically for our varied missions, and we’re looking forward to officially dedicating it to the community in a public ceremony.”

The vessel includes enhanced features such as shock absorbing seats, upgraded side-sonar scan to support search and rescue, state and commercial band radios, the latest in radar and chart plotter technology and more. Additionally, the boat includes remote fire monitoring on the roof, allowing fires to be fought at a closer distance but with the added protection of controlling water flow from inside the cabin. The vessel is also equipped for and capable of transporting patients. It has a full walk-around cabin and easy access to the bow, and triple Yamaha 300 HP outboards allows the boat to reach speeds in excess of 43 miles per hour, which is key in emergency response.

Silver Ships first built a similar vessel for the East Hampton Fire Department more than 15 years ago, and the organization recently returned to Silver Ships when it was time for an upgrade.

“It’s always exciting to have the chance to work with a long-standing client on a project to help them meet their updated mission-specific needs,” says Jason Powers, Director of Business Development for Silver Ships. “This was a unique vessel to build due to the many responsibilities it will have on the water – it showcases the latest in fire and patrol technology for watercraft without diminishing overall durability and quality. We’re confident it will serve the fire and law departments and their community well for years to come.”

The vessel will be commissioned at an exclusive “splash down” ceremony on Wednesday, July 26 at 11 a.m. at the U.S. Coast Guard Station in Montauk, located at 69 Star Island Road. Members of all task forces that will have a part in operating the boat will be present. The event is open to the public so those in attendance can tour the vessel and learn more about its specific capabilities.