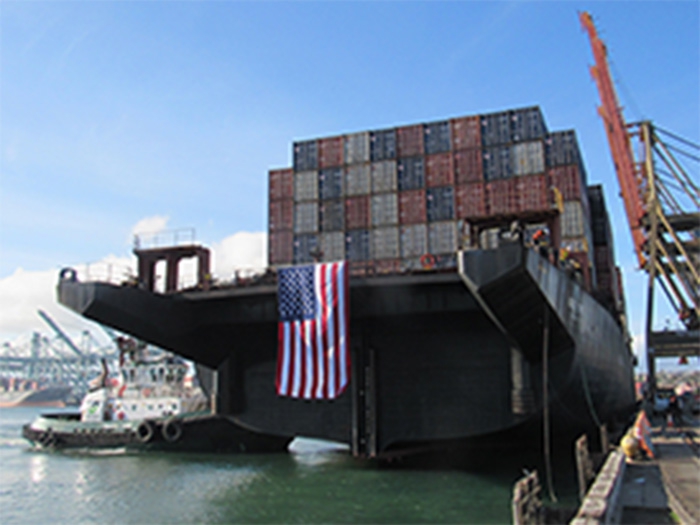 FEBRUARY 15, 2018 — Honolulu, Hawaii, based Pasha Hawaii reports that its 2,437 TEU, U.S. flag, Jones Act containershipl Horizon Spirit has returned to the U.S. West Coast after providing service in the Puerto Rico market to support the movement of extraordinary volumes of cargo for use in hurricane relief and rebuilding efforts.

Since cargo volume can now be handled by the U.S. Jones Act vessels customarily serving the Puerto Rico market, the vessel will serve as a reserve ship in Pasha Hawaii’s container business between the mainland and Hawaii. It will relieve the Horizon Reliance which is to undergo regulatory dry docking maintenance at a U.S. West Coast shipyard.

In her initial relief deployment to the Port of San Juan, the Horizon Spirit delivered FEMA-sponsored, Lipsey Mountain Spring Water from the Port of Los Angeles, setting a world record for the largest single commodity shipment on a containership, delivering over 800 containers filled with over 15 million bottles of water on its initial humanitarian relief voyage to Puerto Rico..

The Horizon Spirit made a total of eight roundtrip supply and equipment deliveries between Jacksonville, FL and San Juan, bringing 8,000 containers to Puerto Rico on behalf of Crowley and TOTE.

Additionally, Pasha Hawaii supported the two carriers in returning a total of 5,300 empty containers to the mainland,.

“This partnership of domestic carriers coming together quickly to serve the needs of the country is a testament to the strength and necessity of the Jones Act,” said George Pasha, IV, President and CEO. “We are grateful to be able to help our fellow Americans in time of crisis, and continue to hold the people of Puerto Rico in our hearts as they continue to recover and rebuild.”